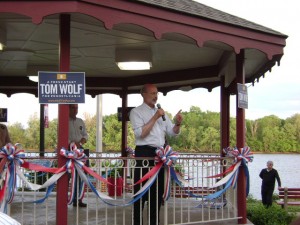 With just hours to go until Election Day, the Democratic gubernatorial candidates are traveling to every corner of the state. Last night, front-runner Tom Wolf visited Southeast PA to make one last pitch for his candidacy before Tuesday.

Wolf spoke in Bristol Borough on Saturday night right by the banks of the Delaware River which was, perhaps appropriately, at high tide. Addressing a crowd of about 100 local residents and politicos from a gazebo in the borough’s riverside park, Wolf’s late evening speech made for quite a picturesque event.

Given recent polling, the nice weather and atmosphere seemed reflective of the candidate’s current standing.

The appearance of the suddenly popular former Department of Revenue Secretary brought out several local candidates including both PA-8 Democratic aspirants Kevin Strouse and Shaughnessy Naughton (their campaign offices are just yards away) as well as State Senate candidate Kimberly Rose.

Wolf worked the crowd both before and after his address and was accompanied by Montgomery County Commissioner Josh Shapiro, who endorsed the candidate earlier this month.

After introductions from Bensalem City Councilman Bryan Allen and Shapiro, Wolf launched into a short variation of his stump speech.

“Do you hear me out there?,” he asked when first handed the microphone before transitioning to a self-effacing, yet self-assured, joke.

“Do you want to hear me out there?”

The candidate asserted that he was not running merely to climb another rung on the government latter or keep a seat warm, but to improve the commonwealth.

Calling the election a clear choice and a referendum he ignored his primary opponents and focused solely on Republican Governor Tom Corbett.

“Do we want a Pennsylvania where we’re hollowing out our schools?,” he asked the assembled crowd which ably provided the requisite shouts of “No!”

“Do we want a Pennsylvania where we’re destroying jobs?” he continued to the same effect.

Wolf concluded his speech a few minutes later by comparing himself to the Governor in remarks that may very well be a preview of the campaign to come.

“In this election, we have a chance to decide on two very contrasting directions on where we’re gonna go,” he said. “2014 is a time when people are looking for a new way. This is our time, this is our place, please help me out on Tuesday.”