Tom Wolf won the Democratic nomination for governor; he will face Republican nominee, incumbent Governor Tom Corbett in the general election this November.

The race was called shortly after 9pm by the Associated Press, after months of Wolf leading the crowded pack for the nomination. He bested early frontrunner Congressman Allyson Schwartz, State Treasurer Rob McCord and former DEP Secretary Katie McGinty.

We will update with final results and remarks from Wolf’s victory speech. 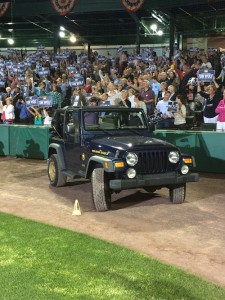 Wolf drove into Santander Stadium of York in the infamous blue Jeep.

“Tonight, I consider myself the luckiest person on the Earth,” Wolf said to an excited stadium full of supporters. “I always wanted to say that on a baseball field.”

He highlighted the opportunities for Pennsylvania and contrasted himself with the Tom he will face this fall and then moved into the audience to meet with voters.

McGinty was the first to publicly concede to Wolf, below is here full statement:

“While the results are not what we wanted, I want to congratulate Tom for running a great campaign and a well-earned victory tonight. And I want to make it clear right now – I wholeheartedly endorse Tom Wolf, and I will be all in to help Tom Wolf defeat Tom Corbett in November! I urge all of my supporters to join me in electing Tom in November.

From the beginning of this campaign, I said that we were going to present a positive vision for Pennsylvania. A vision that focused on guaranteeing that children receive an education that will allow them a shot at the American Dream. A vision that any kid who wants to go to college or a trade school can afford to follow their dreams. A vision that anyone willing to get out of bed every day and work hard would not live in poverty.

This campaign has been quite the experience for my family and me. Traveling to every corner of Pennsylvania, meeting people from all walks of life, from big cities and small townships, I came away inspired. Inspired by the work ethic, the compassion, and the drive to make Pennsylvania better for every generation.

I want to thank everyone that supported me throughout this campaign. I thank you for your devotion, your financial support, your hard work, and your prayers. While we were not successful tonight, our fight for a brighter Pennsylvania continues. Our fight to build a Pennsylvania that improves the lives of Pennsylvania families continues. Together, we can defeat Tom Corbett and build a better Pennsylvania for everyone.”