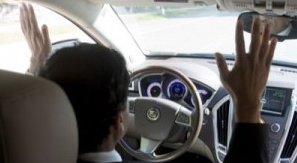 Coming soon to a road near you: self-driven cars?

PA Secretary of Transportation Leslie Richards and several state lawmakers took a ride in Carnegie Mellon University’s autonomous Cadillac SRX on Wednesday in support of legislation working its way through the State Senate.

Officials are looking to catapult PA to the forefront of safe, innovative development in the transportation industry and capitalize on the “emerging industry” of autonomous and connected vehicles, Richards said during the event  in Pittsburgh.

Richards said the move to autonomous and connected vehicles – which are able to communicate with other vehicles, as well as traffic sensors – could help save the state money on infrastructure costs, while creating a boom for related businesses in PA.

“At the state level, these steps could quickly bring additional economic opportunities as automotive and technology companies, encouraged by the legislation, could establish themselves in the state,” Richards wrote in a post on the Governor’s website.

Senate Bill 1268 would allow private companies and state officials to use the Pennsylvania transportation system to test autonomous vehicles, though the bill does not set guidelines for full-scale operation.

Legislators are hoping SB1268 will boost the City of Pittsburgh’s bid for the U.S. Department of Transportation’s $40 million Smart City grant. The Steel City is one of seven finalists for the grant, which is to be awarded this month to help one city “fully integrate innovative technologies … into their transportation network.”

CMU professor and project leader Raj Rajkumar said some driverless vehicles could be ready for highway use beginning next year, with fully automated vehicles for all-purpose use only 10 years away, Ed Blazina of the Post-Gazette reports.

The formation of the Autonomous Vehicles Testing Policy Task Force was also announced at the event on Wednesday. The PA Dept. of Transportation (PennDOT) will chair the task force, which consists of state and federal officials and private-industry stakeholders, such as AAA and Uber Technologies.

As the name suggests, the task force will help PennDOT draft policies for the testing of autonomous vehicles on Pennsylvania roads.

“While our daily mission of maintaining a safe transportation system continues, we are also looking to bring the future here, using the state’s rich history of innovation to establish us as a national leader in these technologies,” Richards wrote.

Seven states – Nevada, California, Florida, Michigan, North Dakota, Tennessee and Arizona – and the District of Columbia currently have autonomous vehicle laws on their books, according to the National Conference of State Legislatures.