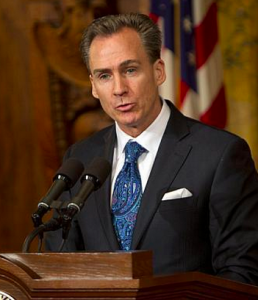 Well, this is certainly a curve ball.

According to a report from Chris Hepp of the Philadelphia Inquirer, State Senator Mike Stack may try to keep his seat even if the Wolf-Stack ticket wins.

So he would be both Lt. Governor and State Senator from the 5th district.

“I’m not counting it out,” Stack said. “It will be something that needs to be discussed and addressed, but first things first.”

Stack pointed out that this has happened twice before. Senate Pro Tempores Jubelirer and Scarnati both moved up in 2001 and 2008 when a vacancy in the Lt. Gov. chair occurred.

Neither of those men ever ran for Lieutenant Governor, however, so the situation begs the question: why would you run for a new job if you still want to keep your old one?

It’s far from clear that Stack would act on this. In fact, this may just be a trial balloon to see what the public, the press and perhaps his running mate think about the idea.

Still, with the election less than two weeks away, this is likely to become a last-minute campaign issue.

Update: The Corbett-Cawley campaign has even weighed in Stack’s proposal, suggesting that he is keeping his options open in case of defeat.

“You can tell middle class Pennsylvanians are extremely worried about multimillionaire Tom Wolf’s income tax hike when even his running mate Senator Mike Stack is keeping his options open for a second job,” said Communications Director Chris Pack. “While Mike Stack is likely far from middle class, given Tom Wolf’s pledge to increase spending by $6.5 billion with no way to pay for it besides tripling the income tax rate, we can’t really blame him for being concerned and looking for a second job. Rest assured though Mike – when Tom Corbett and Jim Cawley are re-elected on November 4th, they are going to continue to keep their promise to make Harrisburg fiscally responsible and keep taxes low for all Pennsylvanians.”