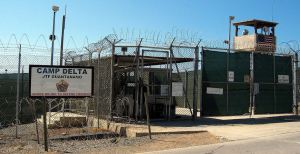 Today, President Barack Obama held a news conference to announce his plan to close the Guantanamo Bay prison before his term is up.

Over the last few hours, various Republican members of Congress from the Keystone State have reacted to the President’s plan.

It’s fair to say they are not enthusiastic.

Their statements are included below:

“Eight years later the President is trying to make good on an ill-conceived campaign promise in spite of bipartisan opposition over the years and the risks to the American people. The fact is President Obama has signed multiple bills prohibiting the transfer of dangerous terrorists to U.S. soil, and I oppose the White House’s plan to now lift this ban and unnecessarily compromise our security.”

“It is already against federal law to transfer Guantanamo Bay detainees to American facilities, which is exactly what a key element of President Obama’s plan will require.  Another problem area is his plan to hand over prisoners to other nations, where we will necessarily be uncertain about their secure confinement and ability to move and rejoin their former terrorist comrades.

“Perhaps the news has yet to reach the White House, but the terrorists have not declared a cease-fire.  The Islamic jihadist terrorist war against the United States and the civilized world continues, and the prisoners held at Guantanamo Bay are among the most treacherous.  I think we all understand that President Obama wants to show the terrorists that we are an understanding nation with appropriate sensitivities, but to take such action would gift-wrap a propaganda triumph for Muslim extremists in their relentless drive to wipe out western civilization.  The president’s view seems to be that if only the United States were nicer to the detainees, then suicide bombers would stop flocking to their violent cause.  He is wrong.  Opening the door for the release of terrorists into stateside facilities, and perhaps even eventually into the general population, is a most dangerous proposal.  In addition, the terrorists’ war is ongoing, meaning that it is probable that new detainees will continue to come into our custody, further complicating the president’s plan.   This is a bad idea, and Congress should stop it.”

“The president’s plan to relocate terrorist-prisoners into the U.S. poses a direct risk to our national security, and is opposed by a bipartisan majority of the House, the Senate and the American people.

Not only does Guantanamo Bay hold some of the most dangerous combatants, it supports important law enforcement efforts and war crimes investigations. These operations have assisted in the prevention of terrorist attacks, the apprehension of enemy combatants and the saving of American lives. The installation has proven critical to our defense and security and must remain in place as we continue our mission to defeat the violent extremists who threaten our lives and liberty.

As President Obama nears the end of his second term, I understand the window is closing to act on the goal he announced his first day in office, but it is easy to see it remains as unpopular, impractical and ill-advised today as it was in 2008.”

“Bringing terrorists held at Guantanamo Bay to the U.S. is against the law,” said Congressman Meehan. “A bipartisan defense bill, signed by President Obama in November, states clearly that taxpayer dollars cannot be used to transfer detainees from Guantanamo Bay to our shores. It’s not ambiguous. President Obama may not like it, but he is bound by it. Moving the detainees to the United States further complicates their legal status. It’s a misguided attempt to fulfill a campaign promise in violation of federal statute and heedless of our own security needs.”

“I’ve visited Guantanamo Bay, and I have seen firsthand the national security benefits this facility provides our nation. In order to check off a campaign promise President Obama has been trying to convince the American people for seven years that the terrorists held there should be transferred to American soil. He couldn’t be more wrong, and the law requires him to provide a plan to Congress on how he would close the facility and where he would transfer the detainees. All the administration released today was regurgitated old talking points lacking the details required by law.

The terrorists held at Guantanamo Bay are some of the most evil people in the world, and many of the individuals this administration has released have gone on to become members of ISIS. I remain strongly opposed to any attempts to close Guantanamo Bay and to transfer them to a different facility.”