PA Sen: Barack Obama To Fundraise with Casey in Philadelphia 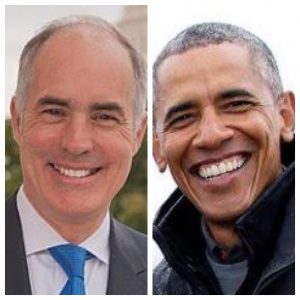 First reported by the Philadelphia Inquirer’s Jonathan Tamari this morning, the Casey campaign confirmed the upcoming campaign visit with the 44th President.

News: @BarackObama will headline a fund raiser for @Bob_Casey in Philly Sept 21

Casey was an early supporter of then-Sen. Obama during the 2008 Democratic Presidential Primary. Then-Sen. Hillary Clinton won the Pennsylvania Democratic Primary over Obama in 2008, although Obama was victorious in the Keystone state during the 2008 and 2012 general election.

The Barletta campaign continued to emphasize that their belief that Obama policies were not beneficial to the country.

“Barack Obama hiked taxes, made the world more dangerous with his irresponsible Iran nuclear deal, created double-digit unemployment, and made health care exponentially more expensive; and Bob Casey went along in lockstep,” Jackson said. “We’ll continue to focus on looking forward to build on our current success for the future, not live in the hopeless failures of the past.”

During July and August, Barletta welcomed in Vice President Mike Pence and President Donald Trump to Pennsylvania for rallies and fundraising events. During Trump’s August rally with Barletta in Wilkes-Barre, the President dubbed Casey “Sleeping Bob.”

The Casey campaign did not provide any more specifics for the upcoming visit.