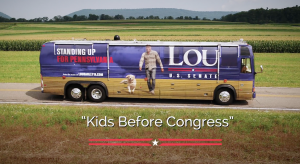 That is the message behind Rep. Lou Barletta’s first television ad of the general election in his quest to unseat incumbent Democratic Sen. Bob Casey.

The GOP challenger’s 30 second advertisement titled “Shame” takes a populist tone on the differences in security measure available for members of Congress versus schools across the country.

“I’m embarrassed by the amount of security that Members of Congress have when our children, when our teachers, go to school every day and are not protected,” Barletta says in the ad. “We have men with machine guns protecting us, we have metal detectors at every turn, as if a Member of Congress’ life is more important than somebody’s son or daughter.”

The Barletta campaign dubbed this week, “School Safety Week” and has planned round table events in different counties to discuss ways to combat school violence.

“We should send every metal detector that we have in Washington to schools around the country and if we can’t put kids before Congress then shame on us,” Barletta also says in the ad.

In the press release promoting the ad, the campaign boasted about a specific piece of legislation he introduced.

PoliticsPA is seeking comment from the Casey campaign and will update the story.

In March, the Senator joined over 30 other Senators in introducing the “Safe Schools Improvement Act” intended to prevent bullying and harassment in the schoolplace and internet.

In the wake of the shooting at Marjory Stoneman Douglas High School, in Parkland Florida, which resulted in 17 deaths, Casey released a statement mourning the loss of the shooting and called for Congress to act with legislation.

“Congress should have votes on measures to reduce gun violence, including universal background checks, a ban on military-style weapons and a prohibition of those on the terror watchlist from purchasing firearms,” Casey stated in the press release. “These measures can reduce the likelihood of a mass shooting and the members of Congress who set the agenda on the floors of the House and Senate should act.”

Barletta also responded to the tragedy at Stoneman Douglas by expressing sorrow and a need to review laws to address the issue.

“As we learn more about why and how this attack was carried out, we must review and address the protocols that allowed for this murderer, who made his intentions clear, to slip through the cracks,” Barletta stated in the press release.

Casey has released multiple ads for the general election cycle, with the most recent on his YouTube channel highlights his support for protecting Pennsylvania steel.