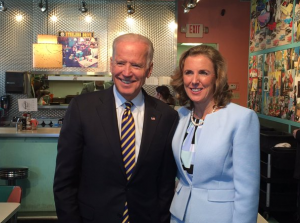 The results of today’s Harper Poll showed McGinty would benefit from her endorsements from the President and Vice President.

The Vice President was scheduled to be in Pittsburgh as part of his domestic violence awareness effort.

So while he was in the Steel City, Biden decided to take a trip with McGinty to Pamela’s Diner. The two sat down for a meal and worked the room.

It will be interesting to see if Biden, President Obama or even Bill Clinton and Hillary Clinton, make any more appearances with McGinty.