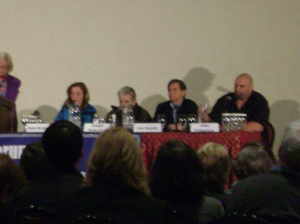 The four Democratic Senate candidates encountered a peculiar environment at the Democratic winter meeting on Friday.

The event was held in a grand ballroom at the Hershey Lodge. The problem was that even with half of the room cordoned off, it was still much too large. As a result, there were all sorts of issues.

The candidates sat at a table at the far end of the room in front of a decent crowd but even with cameras and press it only filled two-thirds of the area. This left plenty of room for people to filter in and out and cause a commotion which the moderator tried several times to quiet.

If it sounds like I’m giving more style than substance it’s because there wasn’t much of the latter.

This point was epitomized by the presence of Joe Vodvarka. Vodvarka ran against Sen. Casey in the 2012 Democratic primary and Joe Sestak is currently trying to get him kicked off the ballot.

Vodvarka made it quite clear what kind of candidate he was from the jump when he called for the country to return to the Tariff Act of 1789. Apparently, he believes our trade policy should be based on legislation drafted before the invention of planes, trains or automobiles.

Clad in a brown leather jacket, Vodvarka mostly slumped in his chair when he wasn’t speaking, as if he was as bored when he wasn’t talking as the rest of the room was whenever he had the floor.

The small businessman was the most exhausting of candidates, one who worships the forefathers but doesn’t actually know the history. For example, he brought out the well-worn anecdote that the Founders created the 2nd Amendment to protect the 1st Amendment. In fact, the Bill of Rights was solely compiled by James Madison and included two other proposed amendments at the top that didn’t ultimately make the cut.

That fact likely won’t affect a man whose opening statement asserted that “for the last six decades our country has been going down the drain.” Almost all of his answers concerned his pledges to fight for “fair trade” and to represent the forgotten “working man” (although he never mentioned the working women).

Unfortunately, there wasn’t any interaction with the candidates and the questions were much broader than necessary. Instead of pointed questions, they were more like opportunities to recite their stump speech on the given issue.

It says a lot that even a candidate as unconventional as John Fetterman repeated many old lines. Nonetheless, not everyone is as big a political junkie as you or me, which means this may be the Senate hopefuls only chance to reach them before April 26th.

Therefore, the trio all put forth their best efforts.

Katie McGinty was the Happy Warrior, making an enthusiastic case for herself while hitting incumbent GOP Sen. Pat Toomey.

“We need to insist that our Senator, Pat Toomey get to work,” she said of the Senator’s refusal to consider a Supreme Court Justice nominated by President Obama. “Do your Constitutionally mandated job. When this President of the United States sends you a nominee, you are to advise, you are to consent and give that nominee a fair hearing.”

McGinty, who has faced questions recently about her campaign, was unfazed by issues like single-payer healthcare and the Black Lives Matter movement.

“Black lives matter, period. I for the life of me don’t understand why anyone feels dragged down by that recognition of the dignity of our neighbor,” she explained. “To me we’re all uplifted when any one of us is uplifted.”

Fetterman, as is his wont, used some-deprecating humor.

“I am a giant fan of the Affordable Care Act, both literally as I’m 6’8”, and in reality too,” he quipped at one point.

Joe Sestak, meanwhile, seemed a bit more intense than usual although that may have been a result of the audio distortion he caused by speaking too close to the mic (McGinty had the opposite problem which caused her voice to echo).

It was clearly evident that he is itching for a rematch with Toomey. For instance, the ex-Admiral recounted a visit then-Congressman Toomey made to his battleship then charged Toomey with repeatedly voting against veterans benefits.

He finished with an allusion to Lincoln in his closing statement, “Never has a government of the people been so looked down upon by the people.”

While none of the candidates were pushed, they each got their fair chance to pitch themselves to Democratic voters who will decide in a month and a half which one they want as their party’s nominee.