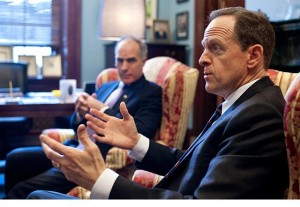 It’s a rare day in Washington when two senators from opposing parties can claim a joint victory. But Senators Bob Casey and Pat Toomey did just that Thursday, when they came one step closer to filling four vacancies on PA district court benches.

“The nominees announced today by President Obama are highly skilled legal professionals who will bring fairness and integrity to their work on the federal bench,” Senator Casey said.

“These nominees possess a wealth of legal experience from their work in both the public and private sectors,” Toomey seconded. “I am confident that they have the acumen, integrity, and respect for the limited role of the judiciary that they need to excel as federal judges.”

The four nominations signal a victory for bipartisanship, as Toomey and Casey have worked together to fill the vacancies on PA’s federal bench. The pair has vetted, recommended, and confirmed 14 Federal District Court Judges and one Circuit Court Judge for Pennsylvania since Toomey joined Casey in the Senate in 2011. Only two other states — New York and California — have seen more appointments over the same period of time.

According to their statements, the Senators will uphold their collaboration as long as there is work to be done filling vacancies in PA district courts.

“As we have done over the years, I look forward to working with Senator Casey on a bipartisan basis to have these outstanding nominees confirmed by the Senate,” Toomey said.

“I look forward to continuing to work with Senator Toomey to recommend highly qualified individuals for the federal bench,” he said.

The Judges’ biographies are presented below:

Judge Susan Paradise Baxter has been a United States Magistrate Judge in the Western District of Pennsylvania since 1995, where she served as Chief Magistrate Judge from 2005 to 2009. Prior to her appointment as a Magistrate Judge, she worked briefly as the Court Solicitor for the Court of Common Pleas of Erie County. From 1983 to 1992, Judge Baxter worked at the Washington, D.C. law firm of Cole, Raywid & Braverman (now Davis Wright Tremaine LLP), where she was elevated to partner in 1989. Judge Baxter received her J.D. from Temple University School of Law in 1983, a M.Ed. from Temple University in 1980, and a B.S. from Pennsylvania State University in 1978.

Judge Robert John Colville has served as a judge on the Court of Common Pleas for Allegheny County since 2000, where he currently presides over civil matters. Since 2012, he has also served as a judge on the Pennsylvania Court of Judicial Discipline. Previously, Judge Colville worked as an associate at the law firm of Pietragallo Bosick & Gordon in Pittsburgh, Pennsylvania from 1994 to 1999. He began his legal career by serving as a law clerk from 1992 to 1994 to the Honorable Ralph J. Cappy, Chief Justice of the Supreme Court of Pennsylvania. Judge Colville received his J.D. from Duquesne University School of Law in 1992 and his B.A. from Pennsylvania State University in 1989.

Judge John Milton Younge has been a Judge on the Court of Common Pleas for the First Judicial Circuit of Pennsylvania since 1996, where he has presides over both criminal and civil cases. From 1985 to 1995, Judge Younge worked at the Philadelphia Redevelopment Authority, serving as Deputy Executive Director and subsequently as General Counsel from 1991 to 1995. He began his legal career as a solo practitioner in Philadelphia from 1982 to 1985. Judge Younge received his M.J.S. in 2011 from the University of Nevada, Reno, his J.D. in 1981 from Howard University School of Law, and his B.S. in 1977 from Boston University.