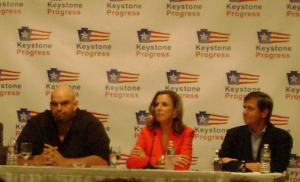 The three Democratic candidates for Senate gathered in the ballroom of the Harrisburg Hilton this evening for their first formal debate (they participated in a forum in Pittsburgh before this).

The event is part of Keystone Progress’ annual Progressive Summit.

In their opening statements, as well throughout the discussion, Fetterman and Sestak talked about their experience as a Mayor and Congressman/Admiral respectively. McGinty, meanwhile, went after Sen. Toomey and his recent comments about the Supreme Court vacancy.

McGinty’s attacks on Toomey turned out to be the only attacks leveled during the debate as the candidates didn’t lay a glove on one another. Instead, they used the opportunity to pitch themselves to the progressive audience.

“You can’t just show up at election time and say the right things and think that is enough,” he said in his opening statement. “My campaign believes your zip code should not determine your destiny.”

McGinty sold herself as a middle class champion.

Former Congressman Sestak cited his experience as his strongest attribute.

The first question came from the Center for American Progress and concerned what type of judicial nominee the candidates would support.

They all made it clear that any judicial hopeful would have to pass several litmus tests. Among them were a women’s right to choose, workers right to organize, and a commitment to overturn Citizens United.

Sestak also pointed out that all the current Supreme Court Justices are Ivy League educated and pledged to push for more educational diversity among the judiciary.

The next questions came from the Women’s Law Project and New Voices and concerned ensuring women’s equality in the workplace and protect a woman’s right to choose. Once more, all the candidates cited their personal experience and pledged to protect women’s rights.

McGinty pointed to the prominent activist Malala Yousafzai, calling for a “Malala agenda”.

The spectre of big money in politics infuriated all three Democrats.

“Why don’t we have an economy that works for people anymore?,” McGinty asked. “All you have to do is follow the money.”

She was also the first to bring up those scourges of Democrats, the Koch Brothers.

Sestak went even further, asserting that “I believe if you take money out of politics, you’d fix 80% of the problems.”

Meanwhile, Fetterman asked everyone who thought money had an outsized influence in politics to raise their hands. Subsequently, every single hand in the audience went up.

“Well, you can all relax because it’s much worse than you think,” he joked before declaring that “Citizens United has to fall and democracy must return to our country.”

In the Democratic presidential primary, single-payer healthcare has been a contentious issue as it is a core tenant of Sanders’ campaign while Clinton proclaims it unrealistic.

It shouldn’t be a surprise then that Fetterman (who is “feeling the Bern”) supports such a measure.

McGinty and Sestak, however, also embraced the concept and talked about the impact health crises have had on their lives. For McGinty, it was her sister who died from brain cancer while for Sestak, it was his daughter who survived a brain tumor.

The next question came from the audience and concerned the moral obligations of climate change.

“How many planets do we have to live on currently?” Fetterman joked. “101 out of 100 climate scientists say this is a huge, huge deal.”

McGinty pointed to her long work on environmental issues which goes back to joining Al Gore’s staff in 1989. It was also at this moment that she got the biggest applause line of the night. “You know, with Republicans, on climate they say they’re not a scientist so they can’t do anything. But when it comes to women’s health, they’re suddenly got an MD and a PhD.”

Sestak called climate change a national security issue and reiterated that he supports a moratorium on fracking.

The three candidates didn’t even argue when they reached the most divisive issue in the Democratic Party: trade.

All of them rejected the President’s Trans-Pacific Partnership.

“I’m fundamentally opposed to the Trans-Pacific Partnership and the fast-tracking of it,” McGinty stated.

“I’m not a supporter of TPP, how can you be?” Sestak asked.

Fetterman agreed, admitting that he never thought he would ever say “Ross Perot was actually right about something”, referring to Perot’s infamous description of NAFTA as a giant-sucking sound. He went on to call TPP “NAFTA-redux”.

“I’m all for fair trade,” he stated. “But this is free trade and free trade means we will screw you over.”

The candidates were then asked about systemic racism and they all pledged support for the “Black Lives Matter” movement.

Labor unions were the next topic with each of the three again telling an anecdote from their lives. McGinty talked about how she came from a union household while Sestak touted his 100% record from the AFL-CIO. As is his wont, Fetterman turned to humor.

“I’m 46 years old and I’ve yet to meet a greedy union member but I’ve met greedy CEOs,” he declared.

The closing statements soon followed and the debate was over.

This was not destined to be a night of fireworks or even disagreement. Nevertheless, one got a good look at each person and how they’re presenting themselves to the electorate.

McGinty was on point and signaled she is ready to face down incumbent GOP Sen. Pat Toomey. Fetterman and Sestak, on the other hand, proclaimed themselves outsiders seeking to serve as a continuation of their governmental and military careers.

All is civil now but there’s just sixty-five days to the primary and the clock is ticking.