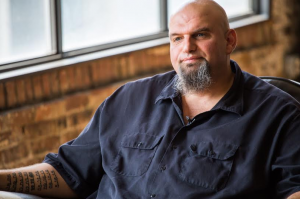 The Keystone Progress debate had just ended but John Fetterman was still eager to talk.

There hadn’t been a lot of actual debate up on the stage and I was searching for what truly distinguishes the three candidates. The Braddock Mayor was happy to comply.

As the ballroom emptied we sat at one of the round dining tables and talked for a half-hour about the debate, the race and the job.

It’s beyond cliche at this point to talk about Fetterman’s size but it’s impossible to ignore. For instance, just resting his arms on the table was enough to noticeably bend it. Perhaps intentionally, he is rather soft-spoken and seeks to draw people in rather than intimidate them.

In fact, several times during the course of our conversation people came up to shake his hand and tell him he’d done a good job.

We started on the topic of fundraising, as I’ve always been interested in just how much time candidates, even self-proclaimed outsiders, have to devote to it.

“It’s just not dignified for candidates to do that, we’re not telemarketers,” Fetterman stated.

“If your average citizen could spend an afternoon doing call time, we would have a mass movement towards reforming,” he predicted. “The influence of money is toxic in American politics. Fundraising, between call time and everything else, is a significant expenditure of time and resources. I’m not a transactional person by nature.”

He said he has never felt pressured by anyone to support an issue in order to get a check but did reveal that he personally calls every donor to this campaign.

“It’s about showing gratitude for the money that you’ve parted with, I’ve never felt entitled to your money.”

Being a small-town Mayor and U.S. Senator are two very different jobs. The former involves the hands-on attention Fetterman seems to relish while the latter requires a detached, bird’s-eye of politics and policy that doesn’t really jive with the candidate’s personality.

So I put the question to him point blank, why the Senate and why now?

“Because I’ve kind of bumped up against the limits of what I can accomplish as a small-time Mayor.”

He brought up the fact that there are three condemned bridges in his town and the difficulty he’s had bringing attention to that reality. As a Senator, the thinking goes, he would be in a better position to make those changes happen.

It was also at this point that Fetterman took his first subtle swipe at his opponents.

“I just feel like we need a candidate that doesn’t talk about people who you’ve met on a choreographed tour but people that you’ve actually met, lives that you changed. Not I will, but I have.”

With the recent vacancy on the Supreme Court, I asked the Mayor who his favorite Supreme Court Justice was, not counting those currently there.

“The Court has lost its special place in society as an arbiter,” he continued. “That should be the one place we count on people to think of the country first.”

He once again sharply criticized the Citizens United decision.

“I don’t know how in this country we ever could’ve decided that money equals free speech.”

In the debate, all three candidates came out against the President’s Trans-Pacific Partnership. So I asked about TPP, NAFTA and why trade divides the Democratic Party?

“It’s one of the few areas where I’ve actually have ever disagreed with Barack Obama,” he responded. “I know he has his reasons but I can’t even speculate on what they are.”

I then transitioned to the argument that trade is a part of foreign policy and that the TPP is part of the Obama Administration’s “Asia Pivot” to gain allies and isolate China in the Pacific.

How should foreign policy implications be weighed against the impact on local communities?

“So how do you get one that is true?” I interject.

“Until we actually hold China accountable and stop letting them run roughshod over our country it isn’t gonna change,” Fetterman answers.

At this point, he took out his iPhone to make a point.

“Why can’t we make iPhones in our country? Apple is sitting on hundreds of billions in profits, you’re telling me we couldn’t afford to pay American workers to make these products?”

“Until we get to that point, it’s all smoke and mirrors,” he went on. “Just another example of free trade that screws over the middle class. I’m not saying that as a Democrat or as a candidate, I’m saying that as someone who’s witnessed that in my community.”

I went at the question another way, asking how he would convince a Senator like Chuck Schumer to adopt his view.

“I would say, Chuck Schumer, why can’t these [iPhones] be made in America? Explain to me like I’m six years old, why this has to be made in China? I haven’t heard a good reason yet other than it cuts into Apple’s profits.”

When the topic turned to foreign policy, Fetterman grabbed an envelope he had brought on stage with him and pulled out a diagram on Syria. 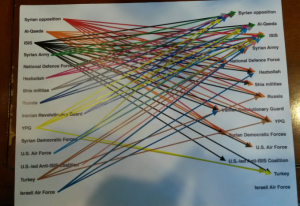 “You’re telling me that anyone on the stage or anyone can navigate that?” he asked incredulously. “What we’ve done for the last fifteen years hasn’t worked and it’s created these kinds of issues right here.”

He cited the Iraq War as one of the reasons he supported Obama in 2008 and Bernie in 2016.

“I’ll pick good judgment, and being of a student history, over bad experience in that arena,” he explained. “If anyone pretends that they can figure this out, they’re lying. There needs to be a greater sense of humility, there needs to be a greater sense of restraint. We have to try diplomacy and we have to try standing down. It’s especially discouraging when you have the other major party’s policy of carpet bombing or ‘bombing the shit out of them’. What is that about, these are serious, serious issues and how is that working for us so far?”

“They use the phrase ‘boots on the ground’, that’s not your skin in the game,” Fetterman continued. “Those boots are people and why would we want to sacrifice anymore of our men and women to unwinnable wars that only create nightmare scenarios like this as a result.”

Fetterman side-stepped my question about what committees he’d like to serve on, saying he didn’t want to get too far ahead of himself.

Instead, he pulled out another photo, this one of a child of a Syrian refugee being handed under a barbed wire fence.

Glancing at that photo, it occurred to me that most of the opposition to bringing in refugees comes from small, economically disadvantaged towns. Cities exactly like Braddock.

“I haven’t encountered that quite frankly,” Fetterman responded when I pointed this out.

I went on to argue that economic stress can constrict the vision of those it affects. Fetterman implicitly conceded this attitude exists but insisted that it isn’t as powerful as one might think.

“I have yet to talk to an individual in my campaign, that when I talk to them one-on-one and I give my rationale for why I support admitting Syrian refugees, that they don’t concede ‘Wow, I never thought of it that way’. They think every person coming from there is a wannabe terrorist, and it’s gonna be jihad and it’s not true. To me this is the face of the Syrian crisis,” he stated while pointing to the photo.

Finally, we finished with what distinguishes him from his two Democratic opponents. For the first time all night, Fetterman really began to lay into McGinty and Sestak.

“Our experience doesn’t coming from stealing a story from someone I met on the campaign trail, it comes from working in these communities.”

“That’s what distinguishes me from the other two candidates in the race,” he continued. “Do you want somebody who is hands on, who believes and has fought his entire career against inequality? Or do you want a recycled candidate, who really doesn’t have a message, other than I want to win one office, I don’t care which one it is, I’ll just keeping running until I get lucky. That’s to me the core distinction here. You know, you’re not gonna see me crisscrossing the state for the next seven years if I don’t win.”

This statement was a clear critique of both McGinty, who ran for Governor in 2014, and Sestak, who infamously walked across the state last year. Fetterman made it clear that campaigning was a burden that kept him from his young family and not something he lived for.

In closing, I admitted that given the lack of real debate on the stage I wanted to get at the differences between the three. In response, Fetterman finished with an appeal that his background is what distinguishes him.

“Of course we’re Democrats and we’re gonna agree on labor unions and a women’s right to choose and a lot of these bedrock Democrat issues. But I think if you explore our biographies, our life stories, you’ll see important differences that would justify my campaign.”

“You can judge a person or a candidate by how they live their lives and what they fundamentally believe is important,” he concluded.