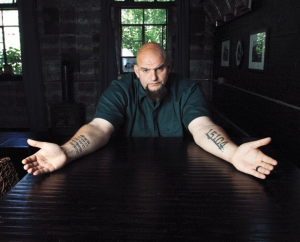 Pennsylvania’s Democratic Party Chairman had some candid comments about this year’s field of Democratic Senate candidates.

Marcel Groen told Melissa Daniels of the Tribune-Review that he’s been impressed so far with the wild card of the race, Braddock Mayor John Fetterman.

“I think Fetterman is more competitive than people think he is,” Groen told Daniels. “Because he’s so different, and he’s really good on issues. Most people who are different are just nuts.”

“I think he’d be the toughest candidate in the general [election],” Groen continued. “In a society looking for different, he could catch on.”

Groen’s comments are particularly notable because most of the party’s establishment, as well as the state’s labor unions, are backing McGinty. He even pointed this out.

Finally, the Chair revealed that he is working to make sure the party does not endorse anyone at their upcoming winter meeting in Hershey this month.

Fetterman, McGinty and Sestak are all competing to take on GOP freshman Sen. Pat Toomey.