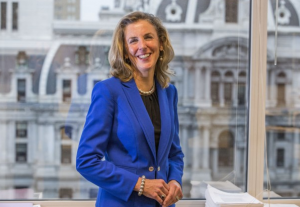 As Pat Toomey’s bill to end federal funding for sanctuary cities came up for a vote in the U.S. Senate, the challenger for his seat wrote to Philadelphia Mayor Jim Kenney asking him to review the city’s immigration policies.

Democrat Katie McGinty said she was concerned when Secretary of Homeland Security Jeh Johnson said there has not been an open dialogue between federal immigration agents and Philadelphia law enforcement officials over the last year.

Shortly after taking over the Mayor’s office in January, Kenney reinstated a city-wide policy blocking police and prison officials from informing U.S. Immigration and Customs Enforcement agents when undocumented prisoners are scheduled for release, Chris Brennan of the Inquirer reports.

McGinty told Kenney to support “robust communication and partnership” between Philadelphia law enforcement officials and their federal counterparts in an effort to ensure public safety and that “violent criminals, suspected terrorists or others who pose a threat are apprehended and prosecuted.”

The “daughter of a policeman” and “granddaughter of Irish immigrants” said repeated failures in Congress to pass comprehensive immigration reform has “hamstrung” law enforcement departments that are already under-resourced and over-worked and called Toomey’s track record for providing proper support to these agencies “particularly troubling.”

The lack of adequate funding for agencies serving large populations, like Philadelphia, leads police departments to focus their efforts on reducing violent crimes and away from pursuing and prosecuting people who violate federal immigration law.

“Philadelphia and many other municipalities have been dubbed ‘sanctuary cities’ because of the decision to prioritize immediate, local law enforcement issues ahead of taking on the added burden of carrying federal immigration responsibilities,” McGinty wrote. “As I’ve said before, ‘sanctuary cities’ are not the answer to our complex law enforcement and immigration reform problems, but reflect this needed prioritization of public safety.”

Toomey’s Stop Dangerous Sanctuary Cities Act was rejected by a 53-44 vote in the Senate on Wednesday, along with former presidential contender and TX Sen. Ted Cruz’s bill to set a 5-year mandatory minimum sentence for people illegally reentering the country after an aggravated felony conviction.

Toomey’s bill would have barred sanctuary cities from applying for Community Development Block Grants, budgeted at $3 billion for 2016, according to the Inquirer.