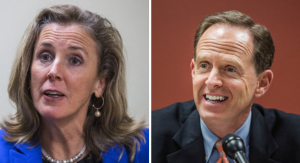 The PA Senate race is a nailbiter right now.

This is an improvement for Senator Toomey who was down four points in the last Monmouth survey in August.

The survey has the Senator’s approval at 42% with 38% disapproving.

Meanwhile, just 27% have a favorable view of McGinty and 29% have an unfavorable opinion. 44% aren’t sure about her.

Monmouth also asked about the issue of taxes. By a 45% to 37% margin, voters think Toomey will do a good job on taxes. On the other hand, they believe McGinty will do a bad job 38% to 42%.

Toomey, however, is ahead in the Northeast and Central sections of state where his lead is identical, 54% to 40%.

Western PA is tied between the two at 45% each.

The Monmouth University Poll was conducted by telephone from September 30th to October 3rd, 2016 with 402 Pennsylvania residents likely to vote in the November election. This sample has a margin of error of +/-4.9%.