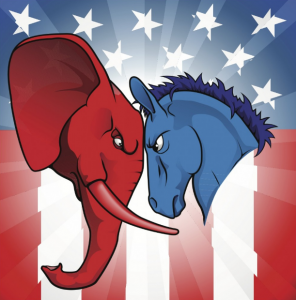 With the departures of Ted Cruz and John Kasich, Donald Trump is now the presumptive Republican presidential nominee.

Furthermore, despite the efforts of Bernie Sanders, Hillary Clinton is extremely likely to be the Democratic presidential nominee.

This could have major repercussions for the second race on the PA ballot: the Senate contest between incumbent GOP Senator Pat Toomey and Democratic nominee Katie McGinty.

It didn’t take long for McGinty to point out this fact.

“Tonight, the Donald Trump-Pat Toomey ticket is all but official and a disaster for middle class families because Trump/Toomey refuse to give hard-working men and women raise they deserve,” McGinty stated. “For many months now, Donald Trump has hurled insults at women, immigrants, Muslims, veterans and many others and despite this, Pat Toomey remained silent and pledged his support to the Republican presidential nominee – Donald Trump.”

“Toomey even refused to do his job in the hopes that Trump would eventually have the chance to fill the vacancy on the Supreme Court. The Trump-Toomey ticket is wrong for Pennsylvania and harmful for hard-working families,” she concluded. “I will continue to stand with Pennsylvania’s working families to move our country forward and reject the policies and ideology of Donald Trump and Pat Toomey.”

Toomey has a complex relationship with Trump.

He endorsed Rubio, voted for Cruz and has criticized the New Yorker in the past.

Nevertheless, Sen. Toomey has stated that he will vote for Trump in November.

It is clear that Toomey’s strategy is to try and link McGinty to Hillary Clinton, as he made clear on Dom Giordano’s radio show today.

“It certainly looks like Donald Trump is on his way to the nomination,” he stated. “That looks pretty clear after [the Indiana primary] and Ted Cruz getting out of the race. Donald Trump was not my first choice. He wasn’t my second choice or third or fourth choice. I have lots have differences with Donald Trump and lots of problems with him but I am absolutely in the ‘never Hillary Clinton’ camp.”

PoliticsPA reached out to the Toomey camp after it became clear Trump would be the nominee and they sent the following statement: “Pat Toomey has made it very clear that he disagrees with Donald Trump in several areas; Katie McGinty has made it very clear that she’s a total liberal rubber stamp for Hillary Clinton and the Washington party bosses who bought her primary victory for her.”

We followed up with the Toomey team and asked if it would be fair to describe this as a Clinton/McGinty vs. Trump/Toomey battle. They did not respond.