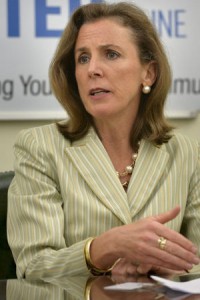 Yesterday it was revealed that EMILY’s List would be launching a $1 million ad campaign for the Democratic candidate.

McGinty Chairman Chairman Ed Rendell, who caused this headache when he predicted the campaign would need $4 million in TV ads to win, also told Elena Schneider of Politico that EMILY’s List would be spending more.

“Former Gov. Ed Rendell, McGinty’s campaign chairman, told Campaign Pro that EMILY’s List will spend far more than $1 million on the race,” Schneider wrote. “Rendell, who has said McGinty and outside groups need to spend at least $3.5 million combined in the primary, said he believed EMILY’s List would spend at least $2 million on television, with the some of the cash coming from the League of Conservation Voters. Both groups have endorsed McGinty, and Rendell said EMILY’s List would be placed in charge of the pro-McGinty independent expenditure operation.”

“Senate campaigns are prohibited from coordinating spending with outside groups,” NRSC’s Alleigh Marre wrote. “Based on reported and public knowledge, there is no reasonable explanation for how the McGinty campaign would know about the efforts Rendell outlined to Politico. The McGinty campaign has some explaining to do.”

While it’s highly unlikely anything comes of this allegation, it is yet another episode where Rendell has left the reservation and caused trouble for McGinty.