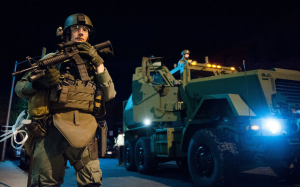 Law enforcement equipment is the latest hot-button issue in the race between Pat Toomey and Katie McGinty.

In the aftermath of the Baltimore riots, Senator Toomey became one of the most outspoken supporters of the police in Congress.

Then in March, the Senator introduced his “Lifesaving Gear for Police Act”. Toomey’s made this legislation a campaign issue, hitting McGinty for not supporting it.

Yesterday, however, Andrew Desiderio of the Daily Beast went after Sen. Toomey and accused him of using the police as a wedge issue. The McGinty campaign eagerly hopped on.

“The report shows clearly that Toomey has opposed sending surplus equipment to local law enforcement, until he reversed his position and introduced a bill to send local law enforcement a wide range of surplus equipment, including grenade launchers and bayonets,” McGinty Communications Director Josh Levitt stated. “Now, though, Toomey won’t even stand behind his own, politically-motivated bill. His office’s spokesman admitted last week that Toomey doesn’t even agree with what he’s proposing.”

The Toomey team took umbrage at Desiderio’s argument, pointing out that the Senator has been focused on this issue for longer than the writer seemed to suggest. They also justified Sen. Toomey’s stance by citing recent events.

“The terrorist attacks in Orlando and San Bernardino demonstrate that it should be easier, not harder, for police departments to acquire lifesaving protective equipment like armored vehicles,” Toomey Communications Director Ted Kwong told PoliticsPA. “That is why numerous law enforcement groups have endorsed Senator Toomey’s legislation and his reelection campaign as well.”