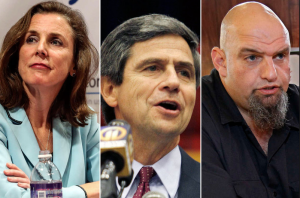 Katie McGinty’s campaign for U.S. Senate seems to have caught traction at just the right time.

With less than a week until PA’s primary, McGinty has dragged herself into a dead heat with former Congressman Joe Sestak, according to the latest Monmouth Poll.

Behind McGinty’s late revival was a swell of fundraising, with the former Chief of Staff to Gov. Tom Wolf raking in almost $1.8 million in the first three months of 2016 – nearly triple Sestak’s take of $640K.

John Fetterman’s FEC report has not yet been processed, though his campaign said it was mailed in time. We will take a deep look at his Q1 report when it becomes available.

McGinty closed the gap on Sestak over the first three months of the year, backed by an impressive financial superiority.

McGinty raised $1,779,347.27 and spent almost $2 million during Q1 in her quest to face off against Pat Toomey in November. The former DEP Secretary now has $953,674.09 available to spend in the last few weeks of the primary race.

Sestak has been somewhat thriftier with his money, spending $1,476,423 in the first three months of the year. However, there is much less money coming in the door for the three-star Navy Admiral, as he brought in just $625,024 in Q1.

McGinty crushed Sestak with PAC money (though Sestak will invariably wear that badge with pride), $187,803 to $4,141.

McGinty has now raised $669K through ActBlue, a Democratic PAC that channels small donations to candidates throughout the country, while Sestak has brought in $349,630 through the same means.

EMILY’s List, a PAC that supports pro-choice Democratic female candidates, has contributed $165,547, while the League of Conservation Voters Action Fund has funneled another $46K into McGinty’s campaign.

Sestak’s donor list was much more PA-based than McGinty’s with 362 large donors from the Keystone State chipping in $698,122 so far to his second U.S. Senate campaign. Just 111 large donors from out-of-state appeared on Sestak’s reports, representing over $230K in contributions.

Somewhat surprisingly, Sestak found more large donors in Pittsburgh than he did in Philadelphia. 38 in the Steel City contributed $65,767, while his more usual support base lagged behind, with 31 in the City of Brotherly Love kicking in $60,399.

Sestak’s only PAC donors were the Duane Morris Government Committee ($2K) and Burghnest ($1,500).

McGinty outspent Sestak by over $500K in the first quarter, with both candidates spending most of their money of ad buys.

Rising Tide of Washington, D.C. pulled in over $51K for online advertising for McGinty and Peter D. Hart Associates were paid $40,750 for polling work.

McGinty paid out over $221K in wages for 17 campaign staffers over the first three months of the year.

Sestak spent $32,400 on polling from DC-based Normington Petts & Associates and $8,221 for fundraising help from GSI, Inc. of El Segundo, CA.

Sestak paid out $86,784.64 in wages for 18 campaign staffers, though two employees only made it one pay period into Q1.

The former Congressman holds a significant cash advantage over McGinty, but he won’t want to sit on that money too long, with less than a week until the state’s primary.