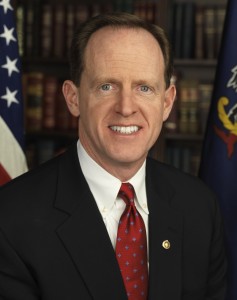 Senator Pat Toomey has three different potential Democratic challengers but that hasn’t stopped him from preparing for next year.

In fact, with a clear primary field ahead the incumbent has the chance to get a major head start over his eventual opponent.

Last week, Sen. Toomey released a few statistics from his latest filing but now we can take a full look.

So far Toomey has no debts, obligations or loans to deal with.

The Senator received significant help from outside entities, hauling in $371,950 from political action committees (PACs).

The incumbent was also the recipient of thousands from the PACs of congressional colleagues like Paul Ryan, Tom Price, Pat Meehan, Joe Heck, Cory Gardner and John McCain.

Furthermore, Toomey got $93,104.41 in transfers from the Republican Party, other colleagues and even more PACs.

As always a lot of campaign cash goes to paying staff and maintaining offices.

Sen. Toomey, though, had plenty of noteworthy expenditures. $274,240 went to Target Enterprises for a media buy for example.

The Senator contracted out direct mail duty to a myriad of groups but HSP Direct ($133,829) got the most business.

Meanwhile, $50,420 was spent on fundraising consulting from the Gula Graham Group and Cold Spark Media’s total tab ran up to $37,719. Amadeus Consulting Group received $15,100 for data management work and America Rising provided $15,000 worth of strategic consulting.