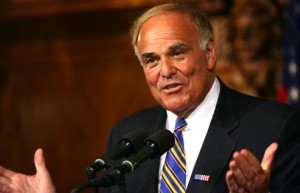 “I am glad that Katie McGinty answered the calls from across Pennsylvania for her to enter the race for U.S. Senate,” Rendell said. “I encouraged Katie to run because she’s a problem solver who knows how to get things done. Middle class Pennsylvanians will have a Senator who will fight for good schools, good jobs, and affordable health care in Katie McGinty.”

“When she was in administration, I saw first-hand that Katie McGinty is a problem solver who knows how to get things done for working families,” Rendell continued. “She will go to Washington and work to make sure that anyone willing to work for it has a shot at the American Dream.”

“It is an honor to have Governor Rendell as the chair of my campaign. He knows how to win tough races and I appreciate his support and encouragement,” McGinty said.

Rendell and McGinty have been allies for years. When he was Governor, she was his DEP Secretary from 2003 to 2008.

Rendell and former Senator Arlen Specter were long-time close friends. So much so that in 2009, the ex-Governor was able to convince Specter to switch parties and (eventually) become the Democrats’ sixtieth seat in the Senate.

Then-Congressman Sestak, however, refused to step aside and beat Specter in the 2010 Democratic primary.

Originally, the ex-Governor didn’t seem to think McGinty would leave her post as Gov. Wolf’s Chief of Staff. A few weeks later, however, once she had made her interest more well-known, Rendell changed his tune.

Now Ed Rendell is all in for another fight with the retired Navy Admiral.

“Establishment Democrats are making their second attempt to muscle Joe Sestak out of a Senate race, after failing to do so in 2010,” said NRSC spokeswoman Andrea Bozek. “Fresh off a last-place finish in the Governor’s race, Katie McGinty has enlisted a party boss to prop up her campaign – but even Ed Rendell has said it’s ‘crazy’ to face off against Sestak in a primary. With the party establishment facing off against a voter favorite, this promises to be a very messy primary for Democrats.”

“If party leaders in Washington and the machine in Philadelphia want an establishment candidate, I’m not their guy. I’m for people, above party or type.”