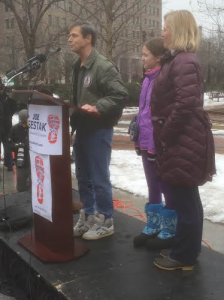 Notably, Sestak was dressed in very casual attire, sporting jeans, a green military jacket and a pair of old Reebok sneakers, which, by the way, now have their own Twitter account.

Sestak also announced his “Joe Sestak is Walking in Your Shoes” campaign, in which he plans to walk across the state of Pennsylvania, from the Eastern-most border to the Western-most border, with a variety of different groups of people each day, including women, veterans, and the homeless. Upon the announcement, Sestak took off his Reeboks, replaced them with brown walking boots, and set off walking towards New Jersey to start the statewide trek.

In Sestak’s favor, Larry Sabato has rated Pennsylvania as one of three toss-up Senate contests in 2016.

Additionally, while several alternatives have been floated, no one else has jumped into the Democratic primary.

Finally, Republicans had a field day when it was discovered Sestak’s website hadn’t launched by the time of his event, although it went online shortly thereafter.

Update: According to Josh Kraushaar of the National Journal, Sestak did not tell anyone from the DSCC that he would be officially declaring his candidacy today.