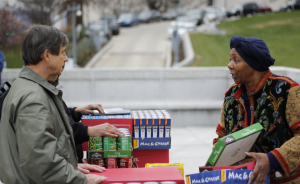 Standing on the steps of the state Capitol, Joe Sestak did something the lawmakers in the building behind him have not been able to for the last six months: help.

After a trip to the capital two weeks ago to hand out food, blankets and other supplies, the Democratic Senate candidate was back with more on Monday afternoon.

Former Navy Admiral Sestak said he can remember handing out humanitarian aid “from the Horn of Africa to the Middle East,” but never thought he would have to do it when he returned home to Pennsylvania.

While in Harrisburg, Sestak lamented the federal funding behind help up during the state’s six-month standoff, due to state law.

“We’re talking about millions of federal dollars prevented from reaching public schools that educate our children, nonprofits that feed the hungry, organizations that provide shelter to the victims of domestic violence and programs that help keep roofs over the heads of of those in danger of losing their homes,” Sestak said.

Since the budget impasse began on July 1st, 25 of PA’s 60 domestic violence shelters have cut services, with 54 set to close by mid-January if they do not get state funding, Peg Dierkers, executive director of the PA Coalition Against Domestic Violence told the Huffington Post.

Survivors in Gettysburg, a rape crisis center, has had to turn away 300 people as the lack of funding began to cripple vital services, including 8 pregnant women.

With the first half of the 2015-16 fiscal year almost over, PA school districts are approaching $1 billion in borrowing, while some have not survived the 25-week standoff. Philadelphia schools Superintendent William Hite told staff last week the district will run out of money by Jan. 29th without a budget.