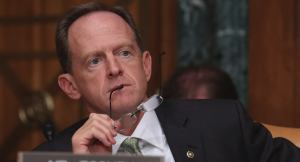 For a little context, Trump University was a for-profit institution that offered courses in real estate and other business ventures. There are now several lawsuits against the now defunct organization for illegal business practices.

Donald Trump has declared that Judge Gonzalo Curiel, a federal judge overseeing one of the lawsuits, had “an absolute conflict” in presiding over the litigation given that he was “of Mexican heritage.”

On Monday, Toomey was clear he had already had enough of dealing with the GOP’s presumptive presidential nominee. He called Trump’s remarks “deeply offensive, it’s ridiculous, it’s outrageous.”

The Senator did, however, express the hope that Trump “can say and do the things that will make me comfortable supporting him.”

On Tuesday afternoon, after it became clear the furor had not died down, Sen. Toomey was considerably more frustrated.

“Well, we’ve spent how much time now talking about the issues that have nothing to do with the work that I’ve done in the Senate, what I’m trying to accomplish in the Senate?” an exasperated Toomey said. “The idea that a person’s ethnicity tells you something about how they’re going to judge cases is just completely wrong. It’s ridiculous.”

Meanwhile, the McGinty campaign sought to preempt the Senator’s efforts to distance himself from Trump.

“Let’s get this straight: Pat Toomey is still standing with Donald Trump even after the presumptive GOP presidential nominee’s ‘textbook definition of a racist comment’ from this weekend. His press conference today was a shameful attempt to mislead Pennsylvania voters into thinking that he has taken a principled stand against Donald Trump’s hateful rhetoric,” McGinty Campaign Spokesman Josh Levitt stated. “But here’s reality: for many months, Toomey has stayed silent as Trump has attacked everyone from women and immigrants to prisoners of war, affirming and re-affirming his commitment to support the GOP presidential nominee – even Trump – along the way. Toomey has not denounced Trump’s candidacy outright,  and will continue to be accountable for the disgusting, divisive message his party’s standard-bearer is sending to Pennsylvania voters.”