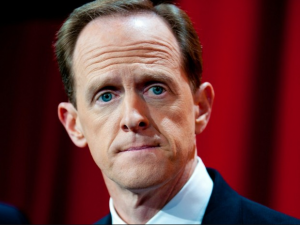 Pat Toomey doesn’t know what to do about Donald Trump.

Today, the Republican Senator held a press conference. According to Jared Brey of Philadelphia Magazine, Toomey was hoping to talk about his Democratic opponent and Philadelphia’s “sanctuary city” policy. Instead, he was asked about Trump’s latest comments.

When queried about Trump’s suggestion that “Second Amendment people” might have a way to stop Hillary Clinton from picking her judges, Toomey decided to punt.

“I don’t know what he meant by that,” Toomey said. “He has attempted to clarify that. At a minimum it was certainly a very careless expression, but as I said, I have not changed my mind about this situation. If and when I do I will let you know.”

“As I have said repeatedly, I have not endorsed Donald Trump,” he continued. “There are things that he has said, a number of things he has said and done that give me great pause and I have significant concerns about, so I remain in a mode of waiting to be persuaded. I’ve not made a final decision on what I’m going to do. Hillary Clinton is completely unacceptable to me. But I have not changed my mind since I laid out my case in an op-ed in the Philadelphia Inquirer, and if I do change my mind, I will let you know.”

Trump’s comments have Toomey stuck between a rock and a hard place as it appears “The Donald” is dragging him down.

Six straight polls (NBC, Quinnipiac, Susquehanna, F&M, PPP and Suffolk) have shown Hillary Clinton leading Donald Trump in the Keystone State. Five of them have also released surveys of the Senate race, while Quinnipiac’s doesn’t come out until tomorrow.

This represents a major shift in the polling of this race. Given that no major events have occurred in this contest, the most likely outcome is that Trump is hurting Toomey.

If the Republican incumbent denounces the top of the ticket to reach out to the middle, he may lose part of his base. If he does nothing this slide may continue. The only clear conclusion is that Toomey has yet to make a decision.