PA-Sen: Toomey Way Ahead of Sestak in Q2 Cash 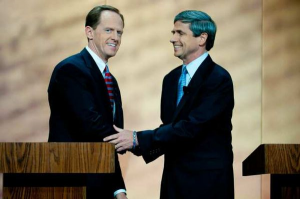 After a close call in 2010, Republican Senator Pat Toomey and Democrat Joe Sestak may clash again in 2016 if Sestak makes it through the primary. The July 15th campaign finance reports indicate that Toomey would start with a large cash advantage this time around.

Sen. Toomey has $5,010,529.63 on hand while Sestak has only $1,271,024.67 available. Sestak will certainly need to trim that gap if he wants to have a chance of beating Toomey in 2016. Of course, the Democratic primary will serve as a test for Sestak, and he will gain larger contributions if he can win the primary. However, Toomey’s donors are already gearing up for 2016.

In terms of sources, Sestak received large sums of money from two attorneys, Joe R. Reeder ($5,200 in contributions) and Michael L. Lehr ($4,600).  Both work for the firm Greenburg Traurig, a company that used to employ infamous former lobbyist Jack Abramoff. Another firm which is heavily sponsoring the Sestak campaign is Devon Hill Capital Partners which described itself as “an investment and consulting firm focusing on small and middle market businesses.” Troy Williams, Joseph Zebrowitz, and Furrukh Munawar of Devon Hill Capital Partners each contributed $2,500. Philanthropist and filmmaker Sidney Kimmel also donated $2,600 to Sestak’s campaign.

Toomey received big monetary support from the Wegman family, who own a chain of grocery stores in the Northeastern United States. Members of the Wegman family gave around $20,000 to Toomey’s campaign. Christopher Hackett, an executive who ran for office in 2008 in PA-10, donated $5,200 while the Reschini family, who own an insurance company based in Indiana, gave around $7,100 to Toomey’s campaign.

As always, much of the money spent was used on consulting firms; however, the Toomey campaign also used a lot of money on direct mail production and postage.  Toomey spent close around $55,000 on postage and related services, but he did not neglect the new-age forms of communication. The incumbent paid over $20,000 to internet consulting firm Push Digital. Other consulting companies which received significant cash from the Toomey campaign include Strategic Fundraising ($6,600.94), LVH Consulting ($9,054.71), and the Gula Graham Group ($15,534.15).

Likewise, Sestak spent a significant portion of his money on consultation. Sestak’s campaign handed over $6,769.20 to political consultant Danielle Lynch. Another $6,000 went to Edwin Wee, and $5,245 was paid to Wired for Change—both brands specialize in political consulting.  Kennedy Printing Company Inc. also received $12,586.06.

Even though the 2016 primaries and elections are years away, the quarterly financial reports for Senator Pat Toomey and Joe Sestak show that the monetary battle is already well underway.