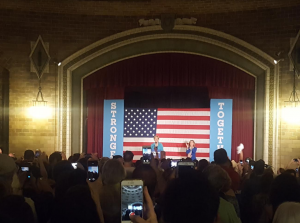 On Friday, Katie McGinty was accompanied by Massachusetts Senator Elizabeth Warren at a rally at the University of Pennsylvania.

McGinty spent the majority of her speech attacking her opponent, Pat Toomey and likening him to Republican presidential nominee, Donald Trump. She asserted that the two stand on the same side when it comes to certain issues and called them the “Trump/Toomey ticket”.

The Democratic nominee explained that Pat Toomey has voted against college affordability, Planned Parenthood and increasing the minimum wage, arguing that “he is not for us”.

Sen. Elizabeth Warren helped to double down on those attacks in her speech, calling Donald Trump “the large orange elephant in the room.”

Warren went down a list of issues regarding Trump, starting with the Trump University case.

“Trump ran his own scam of a university, to trick people into turning over their life savings and when he got called out by his own employees and sued by his victims, what did Trump do? Did Mr. Tough Guy stand up and take his licks? No,” Warren continued. “He whined, he sniveled and then he had a brilliant idea. Attack the Judge who is presiding in the lawsuit because the Judge’s parents came here from Mexico.”

Warren kept rolling with the attack, bringing up the story that surfaced last week of Donald Trump making an illegal contribution to the Florida and Texas attorney generals who were investigating the case. She then asked herself what kind of a person does this, to which she answered “a small, insecure, money grubber who will never be president of the United States.”

The crowd erupted in applause.

She then asked herself another question, “Where has your big, brave Senator Pat Toomey been? Well, he’s trying to hide out. Despite everything that Donald Trump says, Pat Toomey still won’t say he won’t vote for him.”

Sen. Warren then used the same tactics McGinty was using earlier by pointing out specific policies that Toomey and Trump both support. She noted that Toomey and Trump are climate change deniers, want to repeal Wall Street reform, are against an assault weapons ban, against a minimum wage increase, against marriage equality and want a Supreme Court that will overturn marriage equality as well as equal pay for women and defunding Planned Parenthood.

“It is time for us to fight for Hillary and Katie,” Warren proclaimed before exiting the stage.