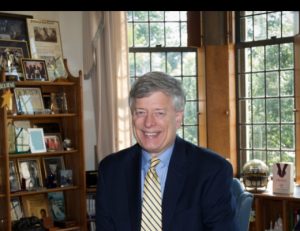 On Monday afternoon, the Pennsylvania Supreme Court announced that Mark Nordenberg, former Chancellor at the University of Pittsburgh, will serve as the chair and fifth member of the Pennsylvania Legislative Reapportionment Commission.

NEW: The PA Supreme Court appoints former Pitt Chancellor Mark Nordenberg as the Chair of the Legislative Reapportionment Commission. This is the group that will be in charge of redistricting in PA. pic.twitter.com/6YFpWmqNm2

Spotlight PA reports that the four elected leaders on the panel failed to agree on the fifth member last week after interviewing over 30 candidates, which resulted in the PA Supreme Court making the decision on selecting the chair.

Nordenberg became dean of the law school at the University of Pittsburgh in 1985 and was elected chancellor in 1996, according to Spotlight PA. Nordenberg announced his retirement as chancellor in June 2013 and currently serves as the Chair of the University of Pittsburgh’s Institute of Politics, which describes itself as a “neutral, non-partisan forum for elected officials and other civic leaders” in western PA.