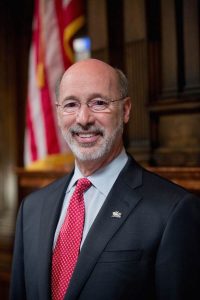 Pennsylvania voters have approved a pair of amendments to the state’s constitution that limit the governor’s power during a disaster declaration.

According to unofficial returns from the Department of State, 53% voted “yes” to ballot questions 1 and 2 on the primary ballot, while 46% voted “no.”

The Associated Press reported on Wednesday morning that both proposed amendments passed.

BREAKING: (AP) Pennsylvania voters become the first in the nation to impose restrictions on a governor’s authority under an emergency disaster declaration.

The first ballot question that was approved to be a constitutional amendment would allow a majority of lawmakers in the state to terminate a disaster declaration at any time. According to Spotlight PA, Pennsylvania’s current law only allows the governor to end a disaster declaration or two-thirds of the state legislature can overturn a governor’s veto.

Pennsylvania Republicans and conservative groups like Americans for Prosperity led the push to promote voters to support both proposed constitutional amendments, while Gov. Tom Wolf and Pennsylvania Democrats urged voters to vote “no” on both ballot questions.

Pennsylvania Republican Party Chairman Lawrence Tabas issued a statement on Wednesday morning touting the passage of Amendments 1 and 2 and called it a response to “Gov. Tom Wolf’s dictatorship.”

“For too long, Pennsylvanians have suffered through the governor’s job-killing mandates and ever-changing rules,” said Tabas. “The passage of Amendments 1 and 2 sends a clear message – voters do not want the Governor’s office to wield limitless, unchecked power.”

Spotlight PA reports that the passage of both proposed amendments is “widely seen as a referendum on the Wolf administration’s response to the coronavirus pandemic.”

According to City & State PA, “conservative organizations drastically outspent” progressives in the lead up to the vote on both ballot questions.