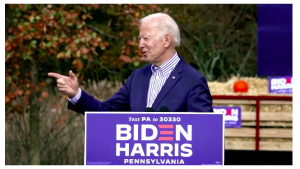 Christina Finello, the Democratic challenger for the 1st Congressional District, is on television with a new ad that features former Vice President Joe Biden promoting her candidacy for the Bucks County seat against Rep. Brian Fitzpatrick (R-Bucks).

“You’ve got the grit, toughness and the smarts to get this done,” Biden continues. “Let’s make sure when we win back the White House we send along Christina, because she’s gonna fight like hell for the families of Bucks County, for hard working folks.”

The clip of Biden used in the ad was from a rally that the former VP led in Bucks County last Saturday.

The Fitzpatrick campaign did not respond with a comment to the ad.

This latest ad is the fifth TV spot from the Finello campaign during the general election, although this is the first ad that touts being endorsed by Biden. Other previous spots include Finello boosting her middle class background, while linking Fitzpatrick to President Donald Trump in the suburban Philadelphia district.

Fitzpatrick’s ads in the race have promoted a bevy of bipartisan endorsements.