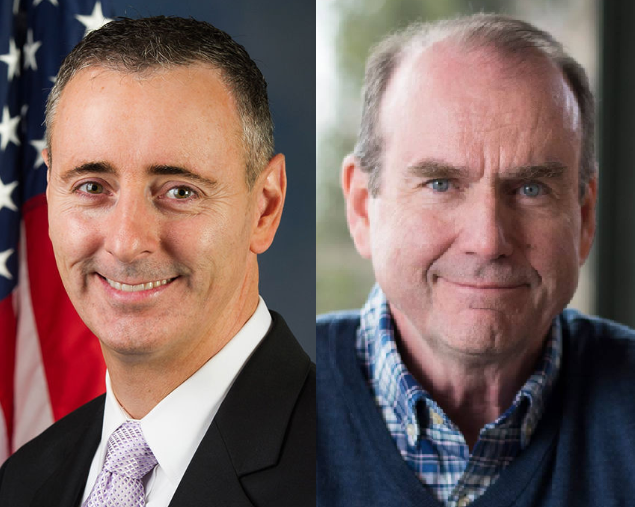 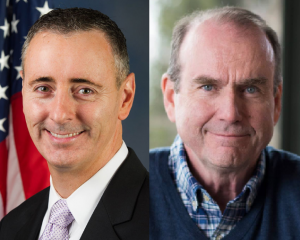 On Friday and Sunday, candidates for Pennsylvania’s 1st Congressional District, Rep. Brian Fitzpatrick (R-Bucks) and Democratic challenger, Scott Wallace participated in two debates in Bucks County. The Friday morning forum was held at Delaware Valley University and co-moderated by the League of Women Voters of Bucks County and the county’s chambers of commerce, according to the Intelligencer. Friday’s showdown included arguments about the role of bipartisanship in Congress and the job of President Trump. Sunday night’s debate was hosted at the Congregation Tifereth Israel in Bensalem, according to WBCB. Wallace’s use of an expletive was the headline from Sunday.

Similar to their first debate, Friday’s discussion included a wide variety of differences between the candidates and occasionally shared some common ground.

In making his case for reelection, Fitzpatrick touted the work and his role in the bipartisan Problem Solvers Caucus, while Wallace believes the district needs a Congressman who will fiercely oppose President Trump and his agenda.

“When we have this rapid pendulum swing, far left, far right, American people never get what they want,” Fitzpatrick said according to the Intelligencer. “And that’s what’s at the core of our (Problem Solvers) caucus. At some point we think that pendulum has got to stop in the middle.”

The Republican incumbent also said he believes bipartisanship is the “only thing that will save our country.”

Wallace doesn’t see Fitzpatrick as an Independent voice for the district and targeted Congress for not pushing back at the President.

“The tone starts at the top, the fish rots from the head,” Wallace said according to the Intelligencer. “We need a more aggressive watchdog in Congress, not a lap dog. We have a president that is without shame, and we have a Congress that is without spine.”

The candidates continued to share their disagreements on the GOP tax reform bill, the Affordable Care Act, and more.

At Friday’s debate, both candidates agreed that they would like to bolster Social Security and Medicaid, support new regulations on gun ownership, support raising the minimum wage, and speaking favorably on investing in “green” jobs in the energy sector, according to the Intelligencer.

Sunday night’s debate story from WBCB was that while Wallace and Fitzpatrick sparred over healthcare, the Democratic candidate used an expletive and “dropped an f-bomb.”

Fitzpatrick criticized Wallace’s language in the WBCB story and made a case for civility in politics.

The WBCB story shows that Wallace about the language he used and explained he is passionate about protecting people from insurance company abuses.

The next debate will be Thursday at 12:15 p.m. at the Bristol Township campus on Bucks County Community College. WBCB 1490AM will broadcast the debate live.

For further in-depth coverage, here is the full recap for Friday night’s debate from the Intelligencer.

Here is the full story on Sunday night’s debate from WBCB.