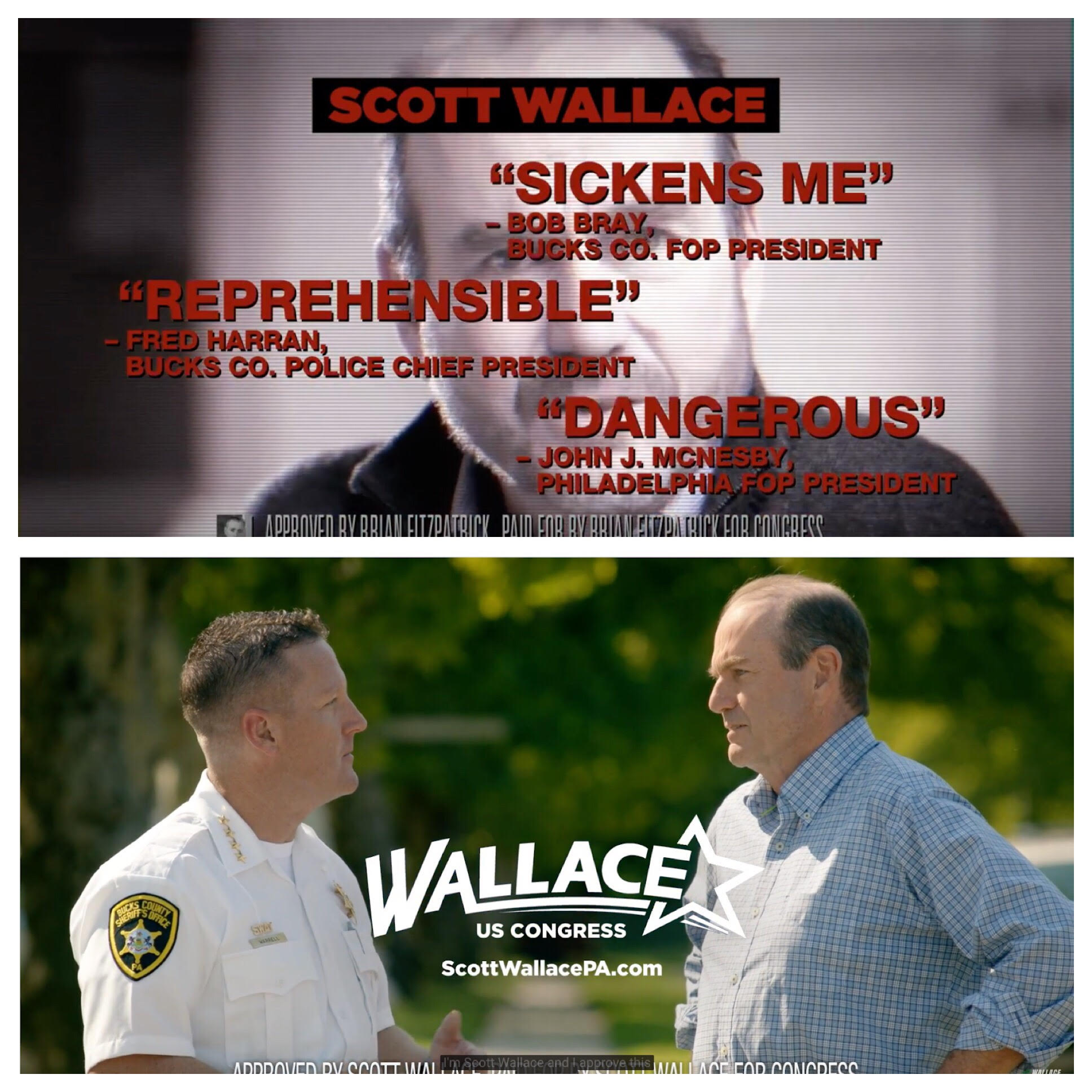 A tale of two ads.

The thirty second ad, “Uncle Phil,” highlights Fitzpatrick’s career as an FBI agent, in memory of his uncle who was a New York City police officer killed in the line of duty, and attacks the Wallace family foundation’s donations to a group they deemed “a liberal organization that has given a voice to the convicted cop killer, Mumia Abu -Jamal.”

“Phillip Fitzpatrick was an American Hero who sacrificed his life in order to serve a cause bigger than himself, and this ad represents all of the good that he stood for and all of the evil that he fought against, a cause he died for,” said Genevieve Malandra, spokeswoman for team Fitzpatrick.

The ad concludes with critical remarks from local law enforcement officials of Wallace.

The organization in question? ‘Democracy Now!,’ a liberal-leaning news outlet. In a fact check disputing Fitzpatrick’s claim, the Philadelphia Inquirer detailed Democracy Now! as, “a nonprofit news organization that has given favorable coverage to Abu-Jamal, who has argued that racism led to his conviction.”

The Wallace campaign said the ad is false.

“It’s absurd to hold Wallace accountable for news stories by this outlet just because they received grants from his foundation for their investigative reporting,” said Zoë Wilson-Meyer, communications director for Wallace for Congress. “This same news outlet also interviewed President Bush’s press secretary and other major Republican figures.”

Hours later, the Wallace campaign released an ad of their own directly addressing the Fitzpatrick ad.

“The truth is, Scott Wallace worked in the Senate for Republicans and Democrats on the Judiciary Committee where he helped write major crimes legislation, including the Missing Children’s Assistance Act,” Wilson-Meyer said. “And Wallace is endorsed by local law enforcement. The real difference in this race is that Scott Wallace won’t take a dime from corporate PACs, while Fitzpatrick is beholden to Trump and the Washington special interests.”

It is true that both campaigns have received endorsements from local law enforcement and first responders.

The Fitzpatrick campaign believes Wallace is hiding behind television ads and challenged him to a debate on law enforcement.

“Rather than have Scott Wallace continue to hide behind his TV ads, we’d like to challenge Scott Wallace to debate Congressman Fitzpatrick on this very topic of law enforcement, to be open to the public, and to be moderated by PoliticsPA,” Malandra said. “Does Scott Wallace accept?”

PoliticsPA doesn’t moderate debates, but the Wallace campaign responded to the invitation by accusing Fitzpatrick of ducking debates.

“Scott has agreed to multiple debates and forums – including a televised debate and a debate on environmental issues, but apparently Rep. Fitzpatrick is not prepared to debate Scott on TV or on his record of protecting polluters over the health of his constituents because he has not agreed to either,” Wilson-Meyer said. “Scott was disappointed to learn the environmental debate was canceled due to Fitzpatrick’s refusal to participate.”

In reference to the ad that started this back and forth, it is not the first time Mumia Abu-Jamal has been referenced in ads for this district. Abu-Jamal was convicted of murdering Philadelphia police officer Daniel Faulkner in 1981, although he and supporters continue to insist that he is innocent.

In 2012, the NRCC released an ad trying to tie the Democratic candidate for Congress, Kathy Boockvar to the convicted cop killer. Boockvar was facing Fitzpatrick’s brother, Rep. Mike Fitzpatrick for this seat.

Philadelphia police officers were required to live within city limits until a decade ago. Now officers are permitted to reside in Bucks County and other Pa. suburbs.