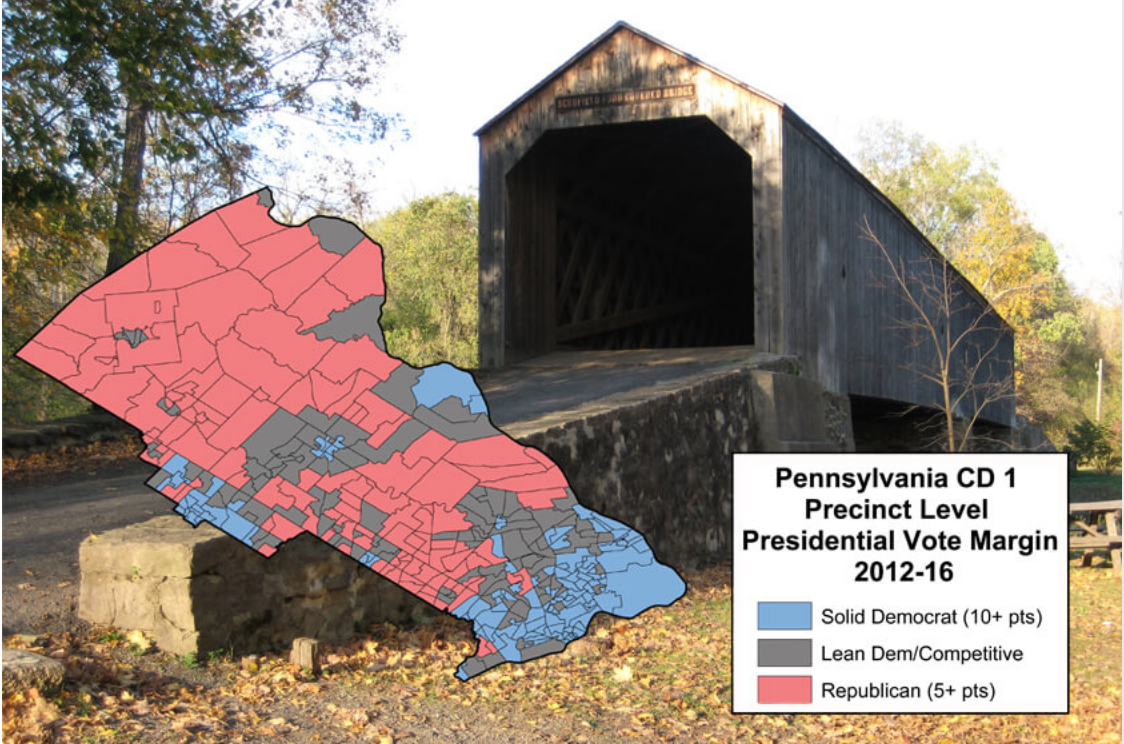 Holding onto to a lead.

In the race for the newly drawn 1st District, Rep. Brian Fitzpatrick (R-Bucks) leads Democratic candidate Scott Wallace by 4 points among likely voters, while his lead shrinks to 1 point in a Democratic surge model in a new Monmouth Poll.

The poll conducted by telephone from September 27 to Oct 1 of 353 likely voters shows Fitzpatrick leading 50 to 46, while 3% are undecided and 1% said they supported “other”. “The error of the difference between the two candidates’ vote share (i.e. the “lead”) is +/-7.4 percentage points,” the article states.

“All the leads in the current likely voter models are within the margin of error for the poll,” the article states.

The political climate of the district favors the Democrat, but the polls show that Fitzpatrick’s approval rating can be credited with his current lead, while Wallace is still unknown by more likely voters in PA1.

54% disapprove of Trump’s job performance, while 43% approve. Numbers have slightly trended downwards for the President as compared to the June poll which 51% disapproved of Trump and 46% approved.

The gap is more significant in those who view strongly disapprove of Trump at 48% in comparison to the 31% in PA-1 who strong approve of the President.

The district also slightly favored Obama over Romney in the 2012 election by 1 point.

45% polled preferred to see a Democratic controlled Congress, while 40% want to see Republicans maintain their majority. Voters prefered a Democratic majority by 5 points as well in June’s poll.

The most important issue for the House race by a significant margin is healthcare, with 28% polled selecting that over 5 other options. On healthcare affordability, Wallace has a 39-33 lead over Fitzpatrick, while 20% saying they trust both candidates equally.

The second most important issue for the House race is immigration at 19%. On the issue of keeping families safe, Fitzpatrick leads 40-30 over Wallace, with 22% saying they trust both equally.

The rest of the issues of importance in order were tax policy and abortion at 12% each, while job creation and gun control were also tied at 11% to round out the list.

Monmouth ultimately believes the race mainly depends on the electorate at the polls for PA-1.

“If Republicans can keep the enthusiasm gap close, Fitzpatrick should be re-elected,” said Patrick Murray, director of the independent Monmouth University Polling Institute. “But if the underlying partisan lean of this district on national issues charges up the Democratic base, Wallace has a shot.”

Wallace’s campaign believes the race is neck and neck and the voters will associate Fitzpatrick with Trump.

“This race is in a dead heat,” said Zoe Wilson-Meyer, Communications Director for Wallace for Congress. “And every day voters are learning more about Rep. Fitzpatrick’s record of standing with Donald Trump – including his votes to strip protections from people with pre-existing conditions, to de-fund Planned Parenthood and take away a woman’s right to choose, and his vote for the tax bill which gave billionaires and corporations massive tax cuts at the expense of Medicare and Social Security for Pennsylvania’s working families.”

The Fitzpatrick campaign also saw the poll as positive news and thinks Wallace is out of touch with the district.

“We are pleased that the voters are seeing through out-of-touch, multi-millionaire Scott Wallace’s attempt to buy a Congressional seat through false ads. Despite outspending us 5 to1, this poll shows our position improving and Wallace losing ground because Rep. Fitzpatrick’s message of reuniting our divided country through compromise and bipartisanship is strongly resonating with voters,” said Genevieve Malandra, spokeswoman, Team Fitzpatrick. “We plan to continue telling the story of Brian’s independent leadership and his ability to work with voters of all political affiliations to deliver results for the 1st District.”

METHODOLOGY: The Monmouth University Poll was conducted by telephone from September 27 to October 1, 2018 with 353 likely voters in Pennsylvania’s 1st Congressional District. The question results in this release have a margin of error of +/- 5.2 percentage points. The error of the difference between the two candidates’ vote share (i.e. the “lead”) is +/-7.4 percentage points.  The poll was conducted by the Monmouth University Polling Institute in West Long Branch, NJ.

This article was updated with comments from the Fitzpatrick and Wallace campaigns.