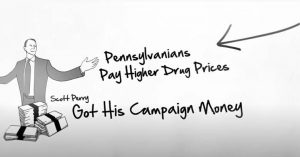 The Democratic Congressional Campaign Committee is on television in Pennsylvania.

In its first TV ad of the general election, the DCCC links Rep. Scott Perry (R-York) to prescription drug price gouging and hits him for accepting campaign contributions from related industries.

“It’s Perry’s prescription price gouging,” a voiceover says in the beginning of the 30 second ad spot. “Scott Perry’s campaign took over $100 grand from the drug and insurance industries and Scott Perry gave the drug companies more than $40 billion in tax breaks and voted against letting Medicare negotiate lower drug prices. Scott Perry didn’t care that Pennsylvanians would pay higher drug prices, he got his campaign money.”

Perry’s campaign fired back at the attack ad by lauding those working to find a cure for COVID-19 in the pharmaceutical industry.

“Congressman Perry is proud to have the support of the 250,000 Pennsylvanians who work with the pharmaceutical industry and are on the frontlines of finding a vaccine to the global pandemic that has impacted all of our lives,” said campaign spokesman Matt Beynon. “Sadly, Eugene DePasquale and his DC allies have decided to vilify these hardworking Pennsylvanians.  It’s because of their tireless efforts that we will find a vaccine and have our lives returned to normalcy, and Scott Perry is excited that Pennsylvania is leading the way with scientific breakthroughs for all of us.”

A spokesperson from the DCCC confirmed that this is the first and thus far only TV ad launched in Pennsylvania since the primaries. It began airing on September 16 and the DCCC has reservations through October 19.

Eugene DePasquale, the state Auditor General challenging Perry, has released multiple ads thus far, but has not gone on the attack yet. Perry’s first TV ad attempted to link DePasquale with Rep. Alexandria Ocasio-Cortez and a “radical socialist agenda.”