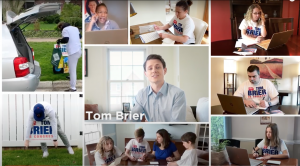 The coronavirus pandemic has changed how candidates are campaigning for office. A Democrat seeking his party’s nomination for the 10th Congressional District shares this message in his first television ad buy, while urging “progressive Democrats” to support his bid.

Tom Brier, an attorney and author’s, campaign released a 30 second spot, “Join Us” that promotes some of the issues his campaign is advocating for, while encouraging voters to apply for mail-in ballots.

“Hi, I’m Tom Brier, and my campaign for Congress has always been about bringing progressive Democrats together,” Brier says to begin the ad. “Lots of Democrats, who are now volunteering from home.”

The ad goes on to feature a number of campaign volunteers who say that Brier supports the following positions: the need to get “money out of politics, combat the opioid crisis, common sense gun laws, healthcare for all, a Green New Deal, and combating climate change.”

“We also need an economic recovery that leaves no one behind,” Brier says at the conclusion of the ad. “I approve this message because I hope you’ll join us. Apply for your mail-in ballot today.”

A spokesperson for the Brier campaign tells PoliticsPA that this first television ad buy that debuted on May 5, is a six-figure ad buy. The spokesperson added that the total run time on air will depend on reception to the ad, but so far “we’ve seen a strong positive response.”

The seat is held by Rep. Scott Perry (R-York), who is currently serving his fourth term in Congress.