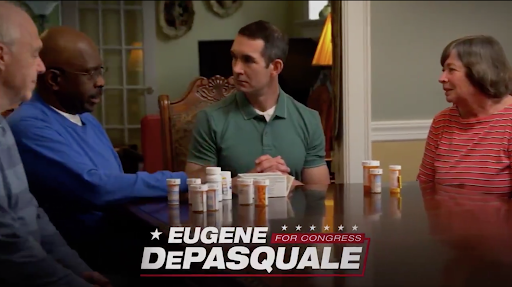 As elected officials across the nation grapple with how to handle the coronavirus pandemic, a Democratic congressional hopeful for the 10th District offers a few solutions of how to address the crisis, while pointing to his record in elected office in his campaign’s first television ad buy.

Eugene DePasquale, the state’s Auditor General, released a 30 second spot on Tuesday, that describes the coronavirus pandemic as a “national crisis, a global pandemic,” and explained what he views as priorities to tackle the virus.

“It’s a national crisis, a global pandemic,” DePasquale says to begin the ad. “And dysfunction in Washington has made things worse.”

I’m running for Congress because Washington is broken. As Auditor General, I’ve seen government dysfunction and done something about it. That is the same type of leadership I’ll take with me to make sure DC is working for South Central Pennsylvania. #PA10 pic.twitter.com/0ravpJT4LH

“I’m Eugene DePasquale, as your Auditor General, I’ve seen government dysfunction and done something about it,” he said. “We need to focus on solutions.”

DePasquale goes on in the ad to say that “protective equipment for frontline workers is needed, enough tests to track the virus, and making sure aid gets to people and small businesses, not corporations with the best paid lobbyists.”

The b-roll footage of DePasquale in the ad was shot prior to the coronavirus pandemic.

The DePasquale campaign added in a statement to PoliticsPA that DePasquale is pointing to his record in the ad as proof he could make government work best for the district.

“We are proud to be running a campaign focused on Eugene’s proven record of taking on dysfunction and waste, and making government work for families in South Central Pennsylvania,” said DePasquale campaign manager Rachele Fortier. “That’s exactly what Eugene will do in Congress: prioritize results over partisanship and provide effective leadership that is so sorely needed, especially at this time.”

While the campaign confirmed that the television ad first aired on Tuesday, they wouldn’t delve into how much the ad buy is for and how long they plan to have the ad on television.

DePasquale is facing Tom Brier, an attorney and author, for the Democratic Party nomination. Brier launched his first TV ad on May 5 that highlights campaigning from home due to COVID-19.

The seat is held by Rep. Scott Perry (R-York), who is currently serving his fourth term in Congress.