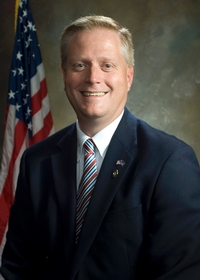 State Rep. Fred Keller (R-Snyder) announced his candidacy for the Republican primary for the special election in the 12th House District.

In a press release announcing his intentions for the seat, Keller thanked Marino for his service in the area and promised to support President Trump’s agenda, while advocating for securing the border and helping small businesses.

“I’ll work to secure our borders and promote economic and tax policies that help families and small businesses. I’ll support our military and promote a foreign policy that puts America first,” Keller said in a statement. “I’ll support President Trump and stand up to Nancy Pelosi and the liberal Democrats in Congress who want to increase taxes and take our nation in the wrong direction.”

Keller was first elected to represent the 85th District in 2010 and has won comfortably or run unopposed in the general election since.

Prior to representing the 85th District, Keller had a 25-year career at Conestoga Wood Specialties, where he rose to become plant operations manager at the company’s Beavertown facility.

He boasts about his business background and believes that coupled with his experience in Harrisburg has prepared him to take on Congress.

“My conservative record in Harrisburg, along with my business background, makes me well- suited to represent the people of the district,” Keller said in a statement. “I have a proven record of working hard to grow Pennsylvania’s economy and attract jobs, standing up for taxpayers, promoting agriculture and tirelessly supporting local families and businesses. I’ll work just as hard in Washington.”

He also stated job training and fighting the opioid epidemic as priorities, while proudly stating his stance for being pro-life and being a lifelong member of the NRA.

After Marino was expected to join President Trump’s administration in 2017, he was one of the rumored candidates who confirmed to PoliticsPA his intentions to seek the seat if it was vacated.

It’s expected to be a crowded field on the GOP side for the open seat. Pennsylvania Capital-Star reports that in addition to Keller, fellow state Rep. Jeff Wheeland (R-Lycoming, Union), former Marino primary challenger and Bradford County Commissioner Doug McLinko, Iraq War veteran and businesswoman Stacy Garrity, among others are interested in the GOP nomination.

This week, the Pennsylvania Democratic Party officially nominated Marc Friedenberg as their candidate. Friedenberg, an assistant teaching professor at Penn State, where he teaches cybersecurity and cyber-law courses, was the Democratic candidate in November against Marino.