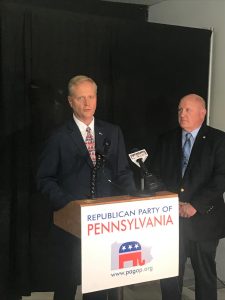 WILLIAMSPORT- Republican delegates from 15 counties convened at Farrington Place to select their nominee for the upcoming special election in Pennsylvania’s 12th Congressional District.

With fourteen candidates officially nominated and four rounds of voting completed, state Rep. Fred Keller (R-Snyder) was awarded the GOP nomination for the May 21 election against Democrat Marc Friedenberg.

Keller surpassed the 102 vote threshold with 113 votes. A simple majority, 102 votes, was needed out of the 202 voting delegates present.

The GOP nominee expressed his gratitude for being selected as the party’s candidate to succeed Rep. Tom Marino (R-Lycoming) and stressed the need for supporting the rule of law and staying true to conservative principles.

“We need someone in Washington who will use pragmatic, conservative principles to ensure that liberty, freedom and respect of the rule of law,” Keller said. “We are a nation of laws and we must make sure we respect all the laws.”

Keller has represented the 85th district in the state House since 2011 and recently began his fifth term earlier this year.

He lauded the intelligence and work ethic of those in the 12th district and directly aimed shots at his Democratic counterpart for the seat for “being out of touch.”

“He’s out of touch and wants to align himself with Nancy Pelosi socialists like Bernie Sanders and Alexandria Ocasio-Cortez,” Keller said. He also criticized Friedenberg for supporting the Green New Deal and Medicare for All.

In a statement, Friedenberg congratulated Keller on his nomination and said he hopes to engage in a series of debates.

The 12th district is one of the most GOP-friendly seats in the state of Pennsylvania. Trump carried these boundaries by over 35 points in 2016, while Marino walked away with a 32 point victory in his most recent re-election bid, which was against Friedenberg.

Despite Trump’s success in the 12th district in 2016, Keller said he wouldn’t “blindly follow him” if elected to Congress, although he said he sees very little reason to disagree with his agenda.

“I’m going to support President Trump when I agree with him and I’m probably going to agree with him most of the time,” Keller said. “I don’t know who can argue with America First and jobs.”

Keller also questioned members of the progressive wing of the Democratic party who have used the expression “resist” when discussing the Trump presidency.

“When I see these ‘I Resist’ bumper stickers, I’m thinking what are you resisting? The American dream?”

Pennsylvania Republican Party Chairman Val DiGiorgio described Keller as a “principled, conservative leader” who will be an ally for President Donald Trump and stand up to the “increasingly-socialist left.”

“Fred Keller is the kind of principled, conservative leader needed for the 12th Congressional District,” DiGiorgio said in a statement. “I have no doubt that Fred will go to Congress and be a strong voice for north-central Pennsylvania, an ally of President Donald Trump, and stand up to the likes of Nancy Pelosi and the increasingly-socialist left.”

The Pennsylvania Democratic Party fired off its own state about the nomination of Keller stating he will support “tax breaks for the wealthy,” criticized his position on healthcare and labeled him a “rubber stamp” for Trump’s agenda.

“Fred Keller will simply be another rubber stamp for this disastrous agenda,” said Brandon Cwalina, Press Secretary of the Pennsylvania Democratic Party. “The people of the 12th Congressional District deserve representatives who will embody their values and will fight for them in Washington — candidates like Marc Friedenberg. Marc will stand up and fight for jobs, health care, and education for every person in the district. We will fight every day until May 21st to get him elected.”

DiGiorgio’s release also echoed Keller’s sentiments about the Green New Deal and Medicare for All and their priority of keeping this seat red.

Marino represented the 12th district since 2011, but announced his resignation from Congress in January. He first stated he was accepting a job in the private sector as the reason for resigning, but told the Daily Item early in February that health issues prompted his resignation.

Marino did not endorse a candidate prior or during the conferee meeting, but stated his satisfaction with the field of candidates and his excitement to support Keller. Marino likened his background to Keller, referencing their past working in the manufacturing industry before being elected to public office.

“It’s getting back to the basics, the roots,” Marino said. “We don’t need someone in D.C. who really doesn’t know what it’s like to get dirt under their fingernails and sweat. We need that type of person in D.C.” 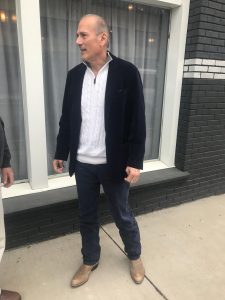 Marino also took time to praise the three women candidates, Jessica Bowman-Hosley, Maria Montero, and Stacy Garrity and pleaded with them to stay involved with politics, while seemingly taking a veiled shot at his former primary opponent, Doug McLinko, who was one of the three final candidates in the fourth round of voting.

“I wanted to make sure that we didn’t have a situation where we were staying splintered and there would be someone in there that we didn’t think could handle the job,” Marino said. He didn’t name McLinko by name, but said to a reporter, “I think you may know who it is.”

Marino’s advice to Keller was to be himself, work hard, talk to people and listen to the concerns of those in the district. He also acknowledged his health issues he has to “tackle” and couldn’t hold office and deal with it simultaneously.

Twenty plus candidates entered the weekend expecting to seek the nomination, although the field narrowed down to 14 being officially nominated for the voting rounds.

One of the notable names who stepped aside last minute was state Rep. Jeff Wheeland (R-Lycoming).

Wheeland decried negative campaigning as a reason for not running for the seat. This was likely a reference to an email sent to delegates late Friday night. The email contained a message, purportedly from someone in Wheeland’s family, opposing his bid.

On the fourth round of voting, Keller received 113 votes, although it is unclear what the other vote totals were in this final round.