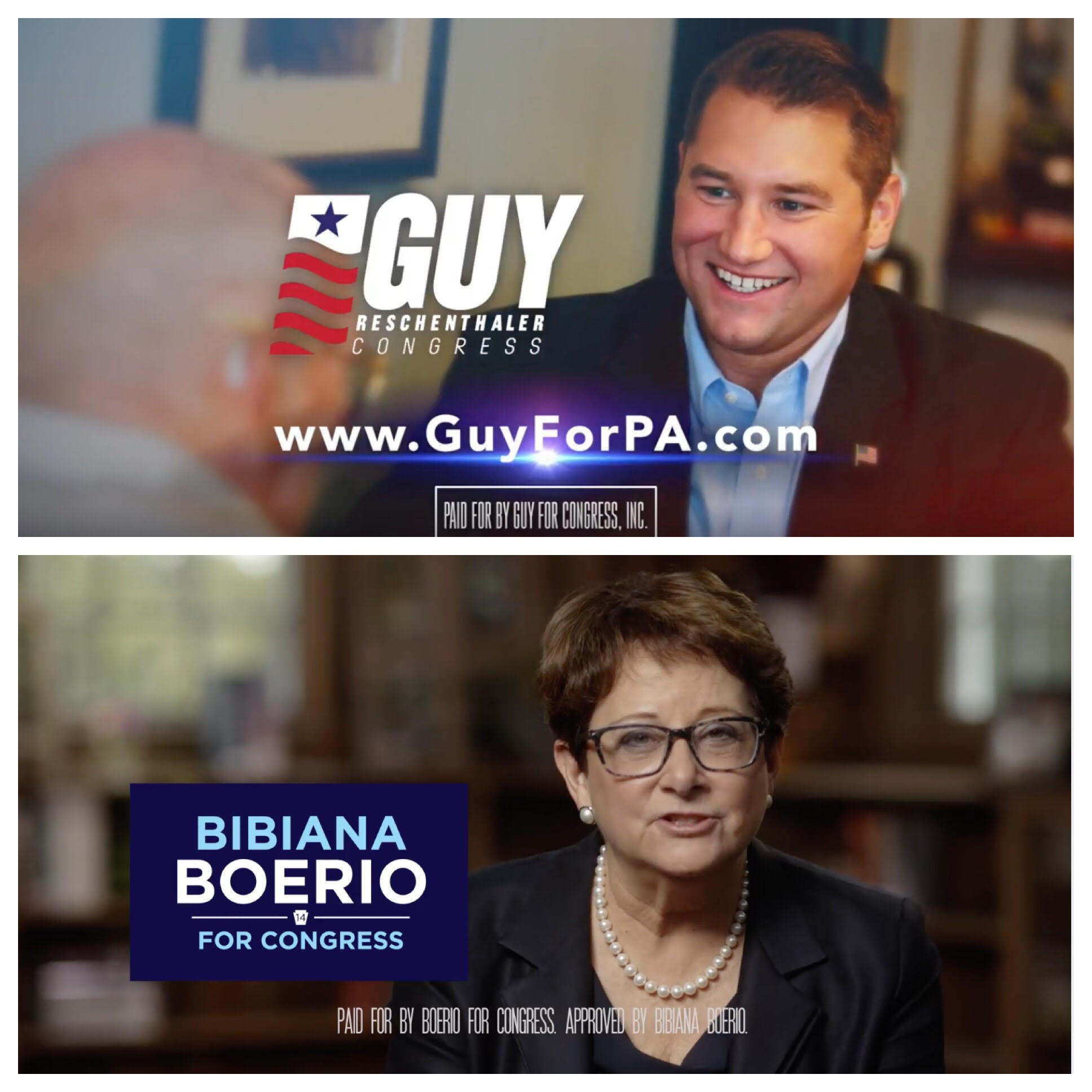 It begins with healthcare and sanctuary cities.

Democrat Bibiana Boerio and Republican Guy Reschenthaler, candidates for Pennsylvania’s 14th Congressional District, both have released their first television ads of the general election cycle. The candidates tout their resumes in the ads, while each focusing on one specific policy issue.

Boerio’s 30 second ad details her various “titles” throughout her life and shares her mother’s health battles to advocate for protecting health care coverage for those with pre-existing conditions.

“I’ve had a lot of titles,” Boerio says to start the ad. “Twin, company executive, university president, daughter and caregiver.”

“Early on, Mom won a battle with cancer,” Boerio says. “She lived with that preexisting condition. Thanks to Dad’s union plan, she never lost her healthcare, but now Guy Reschenthaler supports cutting coverage for people like Mom.”

The Reschenthaler campaign finds the assertion made by Boerio to be untrue.

“Bibiana Boerio’s preposterous claim contains no details because it’s a complete fabrication — unsupported by fact, and issued by an out-of-touch liberal millionaire who would turn everyone’s medical coverage over to faceless bureaucrats in Washington,” said Dennis Roddy, campaign spokesman.

The Boerio campaign believes the ad accurately portrays the candidates record, which they think shows her ability to represent the district.

“She’s experienced in solving real problems in business, management, education and government,” said Connie Jankowski, Communications Director. “She doesn’t want other families to have to worry about the potential catastrophic consequences of a chronic illness without affordable healthcare.”

“Bibie’s not running for a new job title or a promotion. She likes to quote Mr. Fred Rogers, a native of her hometown, Latrobe, PA. His mother told him, “in scary times, look for the helpers,” Jankowski said. “She believes her lifetime of experiences shows she can get into the issues and work with representatives from both sides of the aisle to get things done.”

Congressional candidates in Pennsylvania centering their first television ads around healthcare coverage has become a common theme in 2018.

The Reschenthaler 30 second ad begins by him expressing his connection to the district, explaining his military service and touting a bill to combat “sanctuary cities.”

“I’m Guy Reschenthaler. I’m from here and I share your values,” he says to start the ad. “It’s why I went to Iraq to and prosecuted nearly 100 terrorists. It’s why I introduced a bill to end the dangerous practice of ‘sanctuary cities.’”

The latter half of the ad, which was also used during the 2018 Republican primary, shows his background as a positive while seeking office and channels President Trump by referencing “swamp creatures.”

“Now I’m running for Congress, to stop beltway liberals from doing more damage,” he says in the ad. “It’ll be tough, but I faced down the Butcher of Fallujah. The DC swamp creatures are in for a fight.”

The Reschenthaler campaign believes the ad showcases the best of their candidate.

“We think this spot captures perfectly Guy’s approachability and sense of service,” said Reschenthaler campaign manager Mallory Ruhling Hodge. “He has a record of making us safer by prosecuting terrorists in Baghdad and fighting here at home against extreme liberal policies like sanctuary cities.”

We respect and value Guy’s service to this country in Iraq.  Our country needs war fighters that help to protect us,” Jankowski said. “We’re just not sure how interrogating the Butcher of Fallujah helps you know how to work across the aisle to get things done.”

On the policy end of the ad, the Democrats campaign believes the current Republican policies in place are more dangerous than the “beltway liberals.”

“But unlike the favorite GOP talking points, the headline numbers for national unemployment and stock market growth haven’t trickled down to most parts of the district,” Jankowski said. “The Republicans have been systematically attacking the “steel beams” that help working families thrive — affordable healthcare, quality public school education, retirement security– and that grow the economy for all, not just a few, like strong infrastructure including broadband access.”

“When “DC Swamp creatures are in for a fight,” be sure that Democrats are prepared to stand up for the people who they represent–not for special interests, not for personal benefits,” Jankowski said.

In the GOP friendly 9th district, the Republicans first ad also referenced “draining the swamp”, while the Democratic candidate in that race also echoed a message of protecting those with pre-existing conditions.

If you see this or any ad, I invited you to flag it for me at John@PoliticsPA.com.