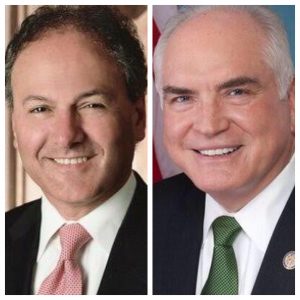 The reuniting of Erie, a “credible Democratic contender” and a possible Democratic wave has made a political analyst change the status of the PA16 race from Likely Republican to Lean Republican.

Wasserman credited the change in rating to multiple factors, but led with the redistricting of Pennsylvania. The new map once again reunites Erie under the same district, which was the case when Kelly first was elected to the district in 2010. President Donald Trump took 61% of the vote in this previous district in 2016, but with the new boundaries it changes his share to 58%.

DiNicola’s campaign believes the change in rating is comparable to what fellow Democrat Connor Lamb was able to accomplish in a special election just a couple months ago.

“Conor Lamb and Ron DiNicola share quite a bit in common,” said Tony Coppola, DiNicola’s campaign manager. “They are both Marine veterans, both are focused on protecting and strengthening Social Security and Medicare, and they both have stated they will not support Nancy Pelosi as the Democratic House leader. This is clearly resonating with voters from Butler to Erie, and everywhere in between.”

Wasserman cites two recent polls that also helped determine changing the rating. A Normington Petts poll taken in early June for the DiNicola campaign gave Kelly a 50-44 lead, while a May PPP poll found Kelly’s advantage to be 48-43.

Kelly’s campaign stressed about making the tax cuts permanent among other issues as the reason they are confident moving forward.

“Congressman Kelly has been meeting with voters, talking about the issues that matter like making the recent tax cuts permanent, supporting industries to make our country energy independent, ensuring our nation’s security and our commitment to serving our veterans,” said campaign spokesman, Mike Barley. “Our campaign is confident that people are not looking to elect Democratic candidates like Ron DiNicola, a two-time failed congressional candidate, who is committed to raising our taxes and will vote to make Nancy Pelosi the Speaker of the House.”

Wasserman concluded that “the combination of a district redrawn favorably for Democrats, a credible Democratic contender and a pro-Democratic national environment makes this a competitive race.”

The full Cook analysis can be found here.