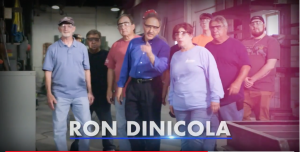 Stepping into the ring.

“Marines are tough,” a voiceover says to start the ad. “Imagine someone tough enough to win the Marine Boxing Championship. That’s Ron DiNicola.”

The 30 second ad, titled “DiNicola tough” on YouTube, is airing on broadcast television in the Erie and Youngstown, Ohio markets and on cable TV throughout the 16th District, which includes all of Erie, Crawford, Mercer and Lawrence counties, and parts of Butler County, according to a press release.

DiNicola’s first ad is debuted the same day as fellow Democratic congressional candidate in Western Pennsylvania, Rep. Conor Lamb (D-Allegheny). Both ads highlight the military experience of the candidate, while taking on special interest, but the DiNicola campaign has made it evident it is trying to liken their campaign and district to Lamb.

“As a Marine vet, DiNicola has a personal and professional story that in many ways parallels that of Conor Lamb, who earlier this year scored a stunning special election upset,” the DiNicola press release states. “Further, the Western Pennsylvania district that Lamb won shares many similarities to the 16th District where DiNicola is running an aggressive campaign to unseat entrenched incumbent Congressman Mike Kelly.”

The Kelly campaign did not immediately respond for comment for this story.

DiNicola’s ad and press release, continuing the theme of fighting, detail a specific instance in which the Democratic candidate went to bat for workers rights.

“When 1,000 workers at GE were laid off, Ron fought the federal government to get them the benefits they earned,” the ad says. “Now Ron DiNicola is running for Congress, to fight the career politicians.”

Kelly was elected to Congress in 2010 by defeating one-term Democratic incumbent, Kathy Dahlkemper. This is DiNicola’s third bid for Congress, his first two attempts were unsuccessful.