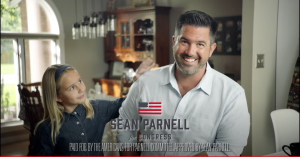 Sean Parnell, the GOP challenger for the 17th Congressional District, is on TV with a new positive spot that compares decisions he made serving in the military to choices he faces as a father of a daughter.

“After Afghanistan, I wrote a book called Outlaw Platoon,” Parnell says to camera at the beginning of the 30 second ad titled “Emma.”

“I thought I was a tough guy who made tough choices, but then, I had a daughter,” Parnell continued. “Now, she makes the tough choices.”

The ad continues to show his daughter deciding on a dress and Parnell combing his daughter’s hair.

“My kids are my world,” Parnell continues. “I lay awake at night trying to make sure I do right by my daughter and my sons so they can have the great country I inherited.”

“And I do too, so we’re done,” his daughter, Emma says at the conclusion of the 30 second spot.

Inside Elections, and Larry Sabato’s Crystal Ball have the race listed as “Likely Democratic,” while the Cook Political Report rates it as “Leans Democratic.”