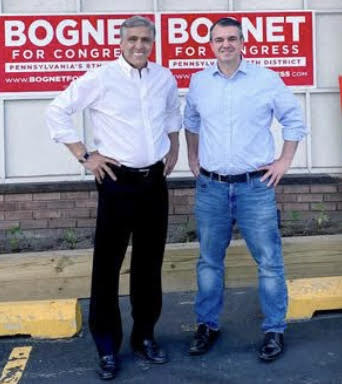 One former Republican congressman from Hazleton is hoping to send another GOP Hazleton native to the halls of Congress.

According to a release on Monday afternoon, Jim Bognet, a former Trump administration appointee who is attempting to unseat Rep. Matt Cartwright (D-Lackawanna) in the 8th Congressional District, has named former Congressman Lou Barletta as the Honorary Chairman of his Congressional Campaign.

“I am honored to have Congressman Barletta join our fight to take back Pennsylvania’s Eighth District for the people. The leadership and service Congressman Barletta showed during his time in Congress will be a true asset to our campaign,” Bognet said in a statement. “No one has fought harder for our District than our friend Lou, and we could not be more excited to have his guidance and support.”

Barletta described Bognet as a “strong conservative voice” for the 8th District and someone who will “proudly work” with President Trump.

“I am thrilled to be joining Jim Bognet in his campaign to be a strong conservative voice for the people of this District in Congress. Jim learned hard work at his family construction business, growing up pouring concrete and digging ditches,” Barletta said in a statement. “We need someone in Washington who will stand up to China, defend our police from the radical ‘defund’ movement, and fight illegal immigration. Jim will proudly work with President Trump and deliver for our District in supporting his America First agenda.”

Cartwright’s campaign responded to this announcement by saying that the Democratic incumbent has a “proven record,” of fighting for northeastern Pennsylvanians.

“Matt Cartwright has always put the interests of all hardworking northeastern Pennsylvanians first, in good times and in bad,” said Matt Slavoski, Cartwright for Congress Communications Director. “We’ll continue talking about how Matt is helping his constituents navigate the coronavirus crisis, his proven record of protecting access to health care, and his work to get northeastern Pennsylvania’s economy running again.”

While Barletta will be assisting Bognet’s quest to unseat Cartwright, there was a few months in 2019 that the former Congressman was reportedly entertaining a bid for the 8th District.

Barletta officially ruled out a bid for the office in September 2019, and announced that he was shifting his focus on his new “boutique consulting firm, Pioneer Strategies,” and helping support candidates that share his stance on undocumented immigration and supporting the building of a wall at the United States southern border through his “Leaders Only Unite,” LOU PAC.

Barletta represented the old 11th District for 8 years prior to his unsuccessful bid for Senate in 2018.