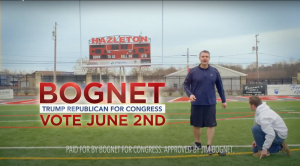 He’s back on television with a second campaign ad.

Jim Bognet, a former Trump administration appointee, released his second TV ad of the Republican primary for the 8th Congressional District and touts his roots growing up in the district, while pledging his support for President Donald Trump’s agenda.

The 30 second spot, “Teammates,” shows Bognet on a football field at Hazleton Area High, harping back on a time when his team and the nation as a whole, “used to win.”

“Around here, we used to win a lot,” Bognet says with a football in his hand, to begin the ad, which is followed by a clip of him kicking a field goal through the uprights during a game for his high school football team.

“But things have changed,” he added.

“China cheated us on trade and sent us the Wuhan flu,” Bognet continues to say in the spot. “Illegal immigrants took our jobs, spread crime, and sent taxpayers the bill.”

“President Trump fights for us,” Bognet continues. “But he needs teammates.”

He ends the ad by saying that his bid for Congress is to “fight for the Trump agenda, build the wall, and put America first,” followed by him kicking the ball through the uprights.

This second television ad, which was first announced by the campaign on May 18, is airing on both broadcast and cable, along with Facebook and Youtube, according to the Bognet campaign.

The Bognet campaign said that this specific TV ad is a five figure buy.

Bognet’s first television ad, which debuted on cable on April 15, is a 30 second spot called “Make China Pay,” which was recorded by Bognet from his iPhone of him at his family’s construction business that has been impacted by restrictions due to the coronavirus pandemic and pins the blame on China for the spread of COVID-19 in the United States.