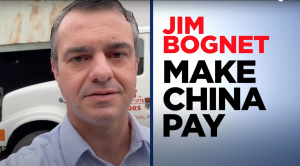 The race for the 8th Congressional District goes to television.

Jim Bognet, a former Trump administration appointee, released his first television ad of the Republican primary race. The 30 second spot, “Make China Pay,” is a video recorded by Bognet from his iPhone of him at his family’s construction business that has been impacted by restrictions due to the coronavirus pandemic. In the ad, he said that he knows his family’s business will get through this, but vows to make China “pay” for their role in the virus’s outbreak in the United States.

“The Chinese lied to us,” he continues later in the spot. “They tried to cover up coronavirus.”

“When I’m your Congressman, we’ll make China pay for the lies they told, the jobs they stole, and the lives we’ve lost,” he said towards the end of the ad. “I’m with President Donald Trump, we will make America Great Again.”

In an interview with PoliticsPA about the ad, Bognet said that he felt “strongly” that he had to go on the record about his thoughts on how he believes that China needs to be held responsible by the United States for the coronavirus pandemic.

“I wanted to speak from the heart about what was going on,” Bognet said to PoliticsPA. “I wasn’t very worried about cinematography, what I was worried about was speaking to the voters about what I think China’s done to us and how we can make China pay for it.”

The television ad, which debuted on cable on April 15, will air for the foreseeable future, according to the Bognet campaign. A source close to the campaign said that the ad will be going on broadcast in the next few days.

The ad buy is in the five-figures.