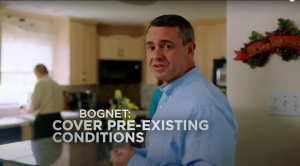 Matt Cartwright beat an opponent by 9 points in 2018, in a district that President Trump carried by 10 points the cycle before. He did it by characterizing his opponent as a carpetbagger who’d cut entitlements and end the Affordable Care Act’s coverage for preexisting conditions.

Jim Bognet was taking notes. The Republican candidate’s first ad of the general election seeks to preempt the same playbook against him.

His positive new 30-second spot, titled “Dad,” starts off by explaining his return to northeast Pa. after a career that took him across the country, including as an appointee in the Trump administration.

“But one day Mom called: ‘Dad had a heart attack.’ He almost died,” Bognet says to camera. “I came back home to help out.”

He pivots to his support for pre-existing coverage and popular senior programs. It’s a partial rebuttal to Cartwright’s opening television ad, which criticized Bognet for calling the ACA “a disaster”.

“I know first hand how important it is to cover pre-existing conditions and protect medicare and social security, especially with COVID,” Bognet says.

It’s a tightrope Republicans have tried to walk since the Affordable Care Act passed in 2010: capitalize on the law’s mediocre approval without opposing its most popular provision. The balancing act failed last cycle, in PA8 and nationally.

Cartwright’s camp is gearing up for a redux. They pointed to Bognet’s work for Mitt Romney’s presidential campaign as proof that his 2020 commercial is just lip service.

“Jim Bognet has spent his career trying to help politicians like Mitt Romney cut Social Security and Medicare benefits that hard-working Americans paid into, and he wants to eliminate the law that protects pre-existing conditions,” said Matt Slavoski, spokesperson for Cartwright. “People need these benefits and protections now more than ever, and Congressman Matt Cartwright has spent years protecting people with pre-existing conditions, and defending Social Security, Medicare, and Medicaid.”