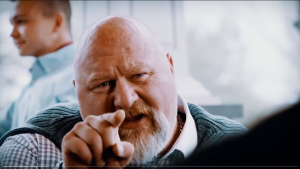 The 2022 congressional race in Northeast Pa. is underway and the lone GOP candidate to enter thus far is making it clear that he wants to own Trumpist lane.

Teddy Daniels, an Army vet and former police officer who finished 2nd in the crowded GOP primary for the 8th District in 2020, is currently the lone Republican who has filed for the race in 2022.

He’s garnered attention in mainstream media and conservative outlets alike in the past week over a new digital ad, plus his criticism of some police officers who testified to Congress last week.

Both messages from Daniels seemingly echo the sentiment of supporters of some of former President Donald Trump’s most staunch allies.

Last Wednesday, Daniels released a 2 and a half minute long digital ad on social media that includes jabs at Democrats and moderate Republicans in an attempt to distance himself from beltway politicians.

The video begins with Daniels sitting across another man in an apparent upscale restaurant with half of a glass of red wine as the GOP congressional hopeful is wearing a sweater tied around his shoulders.

The man sitting across from Daniels tells him that if he “doesn’t do it our way, we won’t back you, we pick who wins and loses around here,” while pictures of Sen. Mitt Romney and Congresswoman Liz Cheney are placed on the table.

“You know what, I’m not doing this fake, phony elitist B.S.,” Daniels responds, while pointing at the man across the table from him. “It’s not me.”

“I don’t need you and I’m not going to let you clowns muscle me. I’m not doing this for you,” Daniels says as he stands up and rips open his button down shirt to show him wearing an “America First” shirt.

Today’s politicians are bought & paid for HACKS who sell out America.

We need Conservative outsiders to drain the swamp & shake up Washington.

Daniels continues to rail against “establishment sellouts,” and liberal Democrats. In addition to images of Cheney and Romney, Congressman Adam Kinzinger, former Speaker Paul Ryan, along with pictures of the Democratic “squad” appear in the video.

The video, which was created by Arsenal Media Group, has 1 million views on his Twitter account and he’s made the rounds on conservative outlets since launching the video to promote his candidacy. The firm’s clientele includes other conservative media favorites like Madison Cawthorn, Sarah Huckabee Sanders, Kim Klacik and more.

Daniels hasn’t sworn off country clubs altogether; he attended a dinner in June and was pictured alongside Trump and some House Freedom Caucus members (in a suit and tie as opposed to a sweater).

The viral video garnered praise from allies of Trump, Daniels, a former cop who attended the “Stop the Steal” rally on Jan. 6, also went all-in on criticism of some of police officers who stood on the other side of the barricades that day.

“There are ‘Cops’ who go out everyday in places across this country, on the street, and do the hard job of policing. Trust me folks, they may wear a badge, they may be law enforcement. But they ain’t ‘COPS’. There is a very big difference between the two,” Daniels wrote on Facebook last Wednesday morning.

Daniels issued a similar message on Sunday morning on Twitter.

“A hand selected liberal.  Might be law enforcement. Isn’t a ‘cop’.  Big difference. When are the families of Cops killed by BLM & Antifa going to get bro hugs from cnn hosts????,” Daniels wrote on Twitter on Sunday morning.

A hand selected liberal. Might be law enforcement. Isn’t a “cop”. Big difference. When are the families of Cops killed by BLM & Antifa going to get bro hugs from cnn hosts???? https://t.co/QyF1AWSJMQ

“We all know that Teddy Daniels was at the Capitol on January 6th participating in the rally to overthrow the democratic election results and install Donald Trump as President for a second term. So maybe his hateful view on the Capitol Police shouldn’t be that surprising — but somehow it still is.

“I find it terribly ironic that the Republican Party constantly tries to attack me with fake lies about my record on law enforcement but now my GOP opponent openly disparages our brave men and women in uniform.

“Let me be perfectly clear: I applaud the officers who bravely protected the Capitol on January 6th and are now telling their stories to Congress. And I will do everything in my power to make sure the anti-police, anti-election Teddy Daniels is not elected to Congress,” Cartwright wrote in the fundraising email.

Daniels did not respond to PoliticsPA’s request for comment about his campaign video and his comments about Capitol Hill police officers.

While Daniels is currently the lone Republican to file for the 8th Congressional District, it is unlikely that he will be the lone candidate to seek the GOP nomination.

A source close to Bognet tells PoliticsPA that he “came within a few percent of upsetting Matt Cartwright and has received tremendous encouragement from voters across PA-8 to run again to help Republicans achieve a House majority in the 2022 election. He is actively considering another campaign. Stay tuned.”

Cartwright is one of four Pennsylvania Democrats being targeted by the NRCC in 2022.

However, Pennsylvania will lose a seat after redistricting, making it difficult for most challengers and incumbents to accurately size up their 2022 prospects. That said, as a district in the corner of the state, PA8 has few areas to expand without becoming friendlier to GOP candidates.