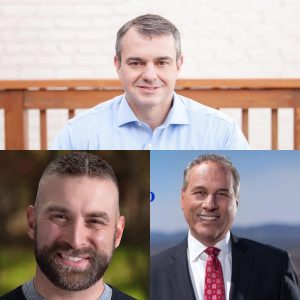 The most competitive primary in Pennsylvania is officially heating up.

After months of Republican campaigns taking shots at Rep. Matt Cartwright (D-Lackawanna), several frontrunners are now taking aim at one another starting with the release of an internal memo.

Jim Bognet, a former Trump administration appointee and one of the six Republicans seeking his party’s nomination, released a “State of the Race” campaign memo boasting about his 1st quarter fundraising, while delivering direct shots to a few of the other perceived frontrunners in the race. The memo was first uncovered by The Hill.

In it, Bognet brands himself a “Trump Republican,” touts his Q1 fundraising, and paints two other candidates as anti-Trump candidates that have “major vulnerabilities.”

The memo cites an old social media post from Earl Granville, a decorated combat veteran and veterans’ advocate who received the endorsement of House Minority Leader Kevin McCarthy (R-CA), where he claimed he was “not a super Trump-Tard” and that he didn’t vote for Trump, while blasting the media. Granville is also criticized in the memo for trailing Bognet in the most recent fundraising report.

Former Hazleton Mayor Mike Marsicano is also in the crosshairs of the Bognet memo, which takes aim at his Democratic candidacy in 2016 against then-Rep. Lou Barletta (R-Luzere) and dings him on previous fundraising issues. Most notably, it attempts to tie him to the infamous “Kids for Cash” scandal because he worked as a pilot for Robert Powell, who owned the juvenile facilities (Marsicano has never been accused of wrongdoing in the case).

Both the Granville and Marsicano campaign fired back, noting Bognet’s years of campaign work outside PA. Including work for Mitt Romney, who has become a persona non grata in Trumpworld since the Senator’s vote to impeach.

“We welcome Mr. Bognet back to northeast Pennsylvania and congratulate him on tapping his DC network of fellow Mitt Romney alumni to fund his campaign,” said Matt Beynon, advisor to the Granville campaign.

Marsicano’s campaign addresses multiple claims made in the memo by saying the claim that he supported Sec. Hillary Clinton in 2016 is “ridiculous” as he touts himself being a “walkaway Democrat” who “proudly voted” for Trump in 2016.

“Jim Bognet conveniently omits that my campaign has $275,000 cash on hand, and only compares himself to candidates who have more limited resources,” Marsicano said in a statement. “Anyone who knows me or has talked to me knows that I am a conservative and always have been. As I have stated multiple times since I began my campaign, I am a walkaway Democrat.”

Marsicano also adds that the Kids for Cash scandal was “tragic and disgrace” to the country and state and said that he had no part in it. He, like Granville’s campaign, continues to slam Bognet for his association with Romney and dubs him as a “RINO.”

“It looks like Jim Bognet needs to resort to misrepresenting the facts in an attempt to gain traction,” Marsicano added. “Bognet used to work for Mitt Romney, one of the biggest sources of resistance to President Trump. Bognet moved back to the 8th District after a 20-year hiatus to run as an opportunist, yet he claims that he can represent the people of the 8th Congressional District? Jim Bognet should focus on how he is going to represent the people of the 8th Congressional District and his record as a RINO, not how much cash he has on hand.”

Bognet’s campaign dismissed the criticism from the other two candidates and claimed he’s the true Trump Republican in the race.

“We’ll put Jim’s record of working for President Trump and Lou Barletta, and fighting in the trenches against Barack Hussein Obama, up against Mike Marsicano’s record of running as the Democrat nominee for Congress during Obama’s term on Hillary Clinton’s ticket in 2016, and Earl’s record as a Never Trumper, any day of the week,” said Bognet’s campaign. “Welcome to the Republican Party, Mike and Earl. What took you so long?”

While Bognet’s campaign took jabs at Granville and Marsicano, they noticeably detail the fundraising of Teddy Daniels, a former police officer and combat Army veteran, but not any further criticism.

In a political environment where a presidential tweet can make or break a candidacy, PA8 hopefuls are leaving no stone unturned in their efforts to play on Trump’s personal loyalty. To wit, Bognet critics have circulated a June 2012 blog post from Katrina Pierson, a former national spokesperson for Trump’s 2016 campaign who remains a leading Trump ally and surrogate. In it, she recounts an interaction during the 2012 Texas U.S. Senate primary.

“Jim Bognet, Lt. Governor David Dewhurst political consultant from California, confronted me immediately following the interview and in public at the RPT Convention with a failed attempt to bully me into silence. It’s a shame this is guy was also on the Romney team. Surprised?” she wrote.

PA8 Bognet State of the Rac… by Jon Easley on Scribd