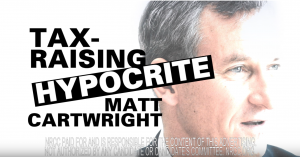 This morning, the National Republican Congressional Committee released its first ad in the race for the 8th Congressional District slamming Democratic incumbent, Rep. Matt Cartwright (D-Lackawanna) on being late in paying taxes, while painting him side-by-side with Minority Leader, Rep. Nancy Pelosi in wanting to raise taxes.

The ad begins and ends with the same clip of Cartwright at a congressional debate discussing the importance of paying taxes.

“Don’t Americans deserve a Congressman who doesn’t make excuses, but goes ahead and pays his taxes,” Cartwright says in the clip.

“Apparently, the $1.4 million check John Chrin wrote to his campaign hasn’t been enough to change what everyone knows: that he is a Wall Street banker from New Jersey – out of touch with NEPA,” said Mike Szustak, Cartwright campaign spokesman.

The Cartwright campaign has regularly hit GOP challenger, John Chrin (R-Skytop) on residency, while the Chrin campaign has attempted to pin Cartwright to the progressive wing of the party on various issues.

The ad goes on to cite Cartwright’s tax penalty and make him out to be an advocate for higher taxes.

“But Matt Cartwright failed to pay his own taxes on his luxury D.C. condo, racking up thousands in penalties,” the ad states. “Worse, Cartwright joined his liberal party boss Nancy Pelosi in supporting higher taxes, all while failing to pay his own.”

This ad is released from the NRCC one day after it was made public that the committee canceled spending in Pittsburgh, impacting Pennsylvania’s 17th Congressional District, that had been set for Sep 12 to Oct 8.

Chris Martin, NRCC spokesman, detailed the importance of this race to the PAC.

“This is a top target for the NRCC in 2018 and we’ll make sure Matt Cartwright is held accountable for his liberal record in Washington,” Martin said. “Matt Cartwright represents everything people hate about politics. He refused to pay property taxes on his luxurious D.C. condo while voting to increase taxes on working families in his district.”

Continuing the attack on residency, the Cartwright campaign believes the NRCC’s introduction into the race shows that Chrin’s campaign needs help.

“Evidently, he couldn’t buy the seat on his own, so the NRCC is riding in from DC to try to save the day. It won’t work,” said Szustak. “Matt Cartwright has spent years building a reputation as a hard-working legislator who does the right things for this area. More smears and lies aren’t going to change that truth.”