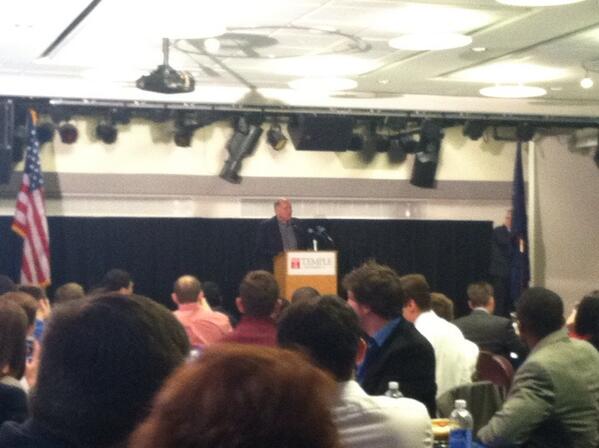 He rallied the young party loyalists with a strong pitch to vote this year.

“Things look pretty good for us in Pennsylvania. More than 55-60% of people say Corbett shouldn’t be reelected. It looks like we can’t lose,” Rendell said. “I have news for you, its an election we can lose. No incumbent governor has ever lost reelection.”

Rendell shared anecdotes from his time in the Governor’s Mansion, including his big win over Lynn Swann and the time he gave Rep. Bud George $10,000 in what he thought was a competitive re-election battle (George took 91% of the vote in that election).

He advocated for an increase of the minimum wage and enact an extraction tax in Pennsylvania, extension of unemployment compensation benefits in Congress and accept the federal Medicaid expansion as part of the Affordable Care Act.

Last night at the PACD gubernatorial debate, each of the four remaining candidates pledged to accept the Medicaid expansion. Rendell mentioned the forum from last night, acknowledging that while the Democrats in the room may now have their different picks for the nomination, on May 21st they need to come together.

He also talked about his book, “Nation of Wusses: How America’s Leaders Lost the Guts to Make Us Great.”

“People always ask why I wrote my book, and I wanted to codify all the things I had done over the years,” he explained. “But I had other reasons. I wanted to motivate young people about what a wonderful way to live your life in public service is.”

He continued to belabor the issue of turnout in the general election, and encouraged the College Democrats to bring their friends to the polls.

“Your job, and I know its a job you’re willing to accept, is to galvanize the base,” Rendell said.

Rep. (and Philadelphia City Council candidate) Ed Neilson did introductions for each of the speakers.

The rest of the day will feature panels on a myriad of topics, including one with this reporter (Social Media, Social Change at 3:20pm).